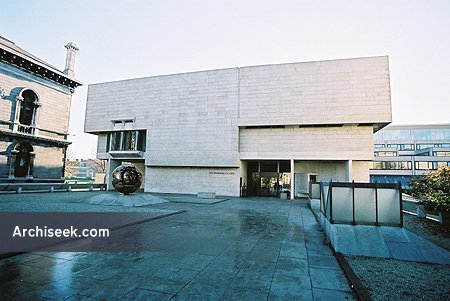 Berkeley Library was very influential on me becoming an architect. It was the first time I felt architecture could speak to me. It was the summer before I went to study at university. I’d opted to study English at Trinity. I was 17. I didn’t study art. I didn’t draw. I didn’t have any understanding of architecture. But I was spending time around the campus and was very interested in the library, and at the same time the Goulding Studio in Enniskerry by Scott Tallon Walker, which was near my home. They both seemed to be incredibly glamorous. They had an extraordinary high focus that I couldn’t articulate at the time.

I remember walking through the campus and stopping to look at these amazing curved windows. I climbed up to them to get a closer look and this guy stopped and started talking to me about them, and got me thinking about architecture. A year later when I came to study at University College Dublin, I realised he was the architectural historian Brendan Murphy.

After this encounter, I remember saying to a friend of mine that I might be interested in architecture. At the end of the summer you have a sort of last chance saloon to apply for a different course and with last minute intuition, I chose architecture. I got an interview purely on my exam results and when I was asked about the buildings I liked, the library was the one I talked about.

Certain buildings have an extraordinary vividness, a sense of being more intense than others. That special presence is renewed every time I see the building. It seems to communicate to me in a quite different way to language.