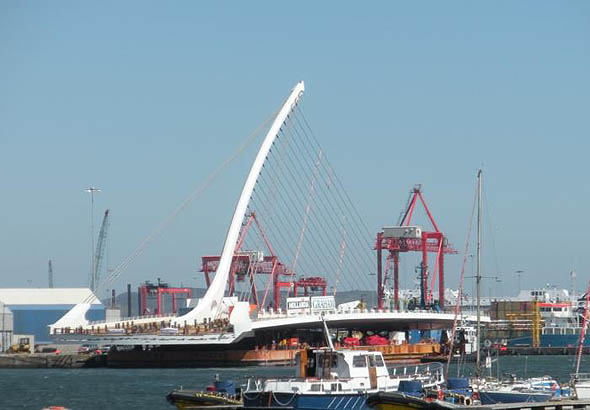 The Docklands Authority has welcomed the arrival of the main structure of the new Samuel Beckett Bridge which arrived in Dublin Port by sea from Rotterdam on Monday morning 11 May, 2009. Originally planned to be transported through the Eastlink Bridge during high tide tomorrow morning, Tuesday, high winds have delayed its transport into the Liffey where it will be moored on a pontoon alongside the south quayside for the next few weeks before being put in place across the river in June. €10 million of the total cost of the project has been provided by the Docklands Authority. The Bridge is being constructed for Dublin City Council by an Irish/Dutch joint venture consortium Graham-Hollandia Contractors.

Paul Maloney, Chief Executive of the Docklands Authority said that the bridge was an important infrastructural element of the expanding Docklands area. “With a growing number of people living, working and visiting Docklands, it is great to see another part of the transport facilities nearing completion. Once opened this landmark bridge will provide an important link between the north and south quays and will facilitate easier access to the National Convention Centre and the O2”, he said. The bridge has been designed by the internationally acclaimed architect Dr. Santiago Calatrava Valls. He has created a distinctive structure with a curved profile leaning northwards. This dramatic shape gives the appearance of a harp lying on its side.

The cable-stayed bridge will join Sir John Rogerson’s Quay on the south side of the River Liffey with Guild Street and North Wall Quay on the north side of the river. When completed, the bridge will have four traffic lanes, with cycle tracks and footpaths on either side. It will also be capable of opening through an angle of 90 degrees allowing ships to pass through. On-site installation work will continue over the next year. The bridge is expected to open to traffic in early 2010 following a series of commissioning works.

The total cost of the project is estimated at €59.5 million, which will also include a major upgrade of the approach roads. The project is being funded by Dublin City Council, the Department of the Environment, Heritage and Local Government and the Dublin Docklands Development Authority.