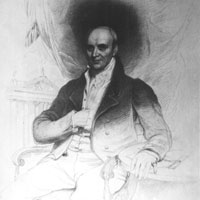 Francis Johnston (1760-1829) was from Armagh and studied under the architect Thomas Cooley. In 1805 he was appointed architect to the Board of Works. His principal buildings in Dublin included the General Post Office (GPO) and St George’s Church in Hardwicke Place. He was responsible for the conversion of the Parliament House to the Bank of Ireland. He worked in many architectural styles – the Chapel Royal in Dublin Castle is an example of his gothic, while his country houses include Charleville Forest, County Offaly – a castellated edifice. He was also responsible for the mock tudor gothic of the gateway to the Royal Hospital Kilmainham. He was one of the founders of the Royal Hibernian Academy and its president between 1824 and 1829.