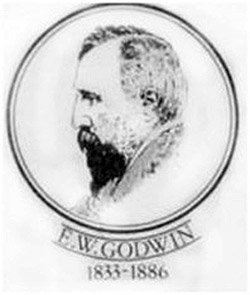 A progressive British architect-designer, who began working in the strongly polychromatic “Ruskinian Gothic” style of mid-Victorian Britain, inspired by The Stones of Venice, then moved on to provide designs in the “Anglo-Japanese taste” of the Aesthetic Movement and Whistler’s circle in the 1870s. Godwin’s influence can be detected in the Arts and Crafts Movement.

His best known early works include The Guild Hall, Northampton, which was his first notable public commission and Town Hall, Congleton as well as restorations and neo-Gothic additions to Dromore Castle and Castle Ashby. Apprenticed to an engineer in Bristol, where his architectural training was largely self-taught, Godwin moved to London about 1862, and made the acquaintance of the reform Gothic designer William Burges.