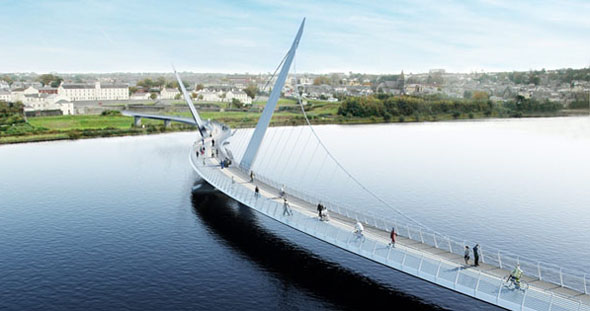 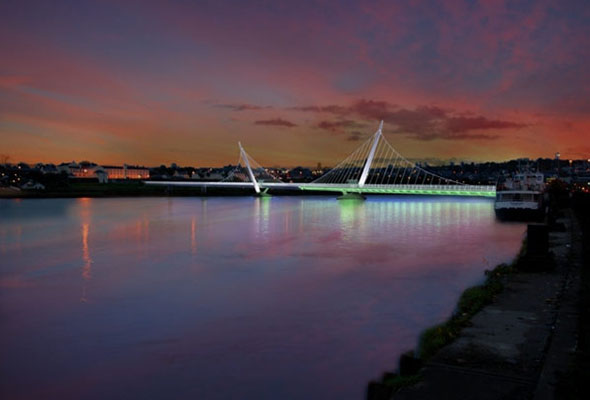 GRAHAM has been awarded an £8.7M contract to design and construct a new pedestrian and cycle bridge across the River Foyle in Derry / Londonderry. The new bridge is part of a programme of regeneration for the area and will connect the historic city centre on the west bank of the Foyle with a proposed mixed-use development on the site of the disused Ebrington Army Barracks on the east bank. The launch of the Peace Bridge took place on Wednesday 9 April 2009 where Deputy First Minister Martin McGuinness MP, MLA, and Social Development Minister Margaret Ritchie MLA, unveiled the winning design for the new foot and Cycle Bridge over the River Foyle.

The tender competition involved contractor-led teams developing conceptual proposals for the bridge which satisfied the client’s aspiration for an iconic structure which will act as a central focus to unify the two historically divided parts of the city. It was a requirement that the proposed bridge would not dominate the other historic features of the City, such as the nearby city walls and the adjacent Guild Hall. GRAHAM in conjunction with bridge architects Wilkinson Eyre and structural engineer Faber Maunsell developed the winning proposal. The project has been taken forward by Ilex Urban Regeneration Company as part of their Regeneration Plan for the city and will receive £13.3million in funding from the European PEACE III Programme. 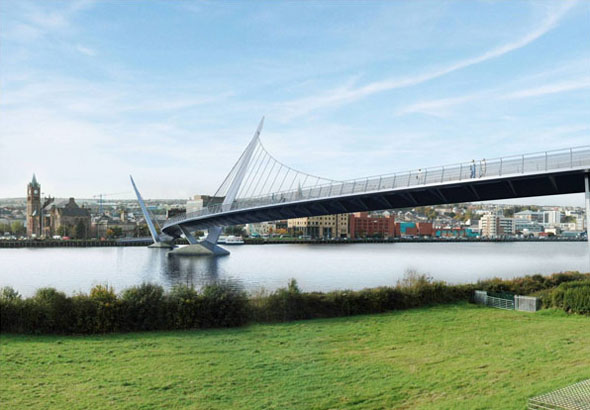 The bridge will be the biggest single regeneration project in Derry City since the Foyle Bridge over thirty years ago. The proposed structure is a 315m long curved self-anchored suspension bridge. It consists of three continuous spans of 67m, 101m and 67m over the river with two further approach spans linking the bridge to the central area of the Ebrington development. The 4m wide bridge deck is supported from 30m high inclined masts located within the channel of the river. It is anticipated that this new crossing of the River Foyle will in time become a defining landmark for the city.

Speaking at the event to mark the unveiling, the Deputy First Minister, Martin McGuinness said: “This bridge can be a significant catalyst for change. It will transform our beautiful city and help transform the local community in the widest sense.

Social Development Minister, Margaret Ritchie, who is responsible for urban regeneration said: “This is a momentous day for Derry. The bridge will be a powerful lasting symbol of the moment a divided people started to reach out to each other. “My Department is at the forefront of regeneration in Northern Ireland and this Peace Bridge is another example of how physical regeneration can deliver a shared future that everyone can sign up for.”

GRAHAM, in conjunction with their design team will develop their design and obtain planning permission for the proposed structure before commencing construction in Autumn 2009. The bridge is scheduled for completion by the end of 2010.