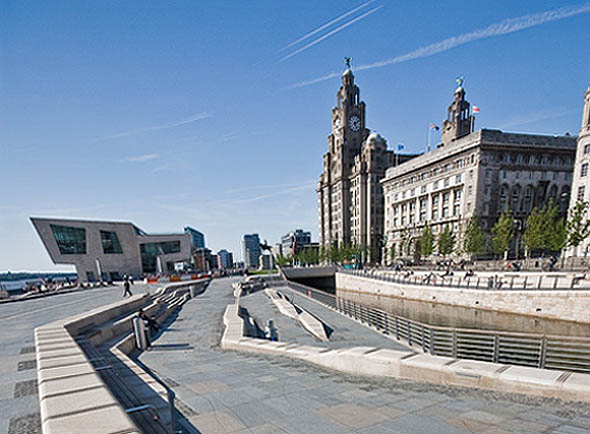 Belfast-based Hamilton Architects has won Building Design magazine’s “Carbuncle Cup” for the new Ferry Terminal in Liverpool, which the adjudicators said was “like letting a bad second-year student build next to St Peter’s” Basilica in the Vatican. They concluded that the architects, who are involved in a controversial scheme to re-order the Ulster Museum in Belfast, “seem barely to have noticed” the amazing site right in front of Liverpool’s “Three Graces” – which include the city’s iconic Royal Liver building. The ferry terminal scheme, completed earlier this summer, incorporates a Beatles museum and rooftop restaurant. It is cantilevered on two sides and clad in limestone in order to complement 3XNielsen’s new Liverpool Museum which is next door. But Building Design’s Carbuncle Cup jury said the new ferry terminal “is essentially a horrible sectional idea that has been extruded like a stick of rock. The long elevations couldn’t be more tedious . . . When you go there you think: “˜oh no, I can’t believe they’ve done that’.”