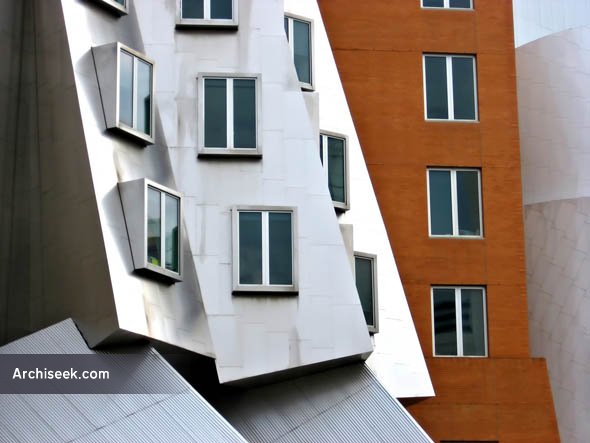 The Ray and Maria Stata Center is an academic complex designed by Pritzker Prize-winning architect Frank Gehry for the Massachusetts Institute of Technology. Contained within the building are the Computer Science and Artificial Intelligence Laboratory, the Laboratory for Information and Decision Systems, as well as the Department of Linguistics and Philosophy. Academic celebrities such as Noam Chomsky, Rodney Brooks, and Ron Rivest have offices there. W3C founder Tim Berners-Lee and Free software movement founder Richard Stallman also have offices within.

The Boston Globe architecture columnist Robert Campbell wrote a glowing appraisal of the building. “the Stata is always going to look unfinished. It also looks as if it’s about to collapse. Columns tilt at scary angles. Walls teeter, swerve, and collide in random curves and angles. Materials change wherever you look: brick, mirror-surface steel, brushed aluminum, brightly colored paint, corrugated metal. Everything looks improvised, as if thrown up at the last moment. That’s the point. The Stata’s appearance is a metaphor for the freedom, daring, and creativity of the research that’s supposed to occur inside it.”

In late 2007 MIT sued architect Frank Gehry and the construction company, Skanska USA Building Inc., for “providing deficient design services and drawings” which caused leaks to spring, masonry to crack, mold to grow, drainage to back up, and falling ice and debris to block emergency exits. In an interview, Mr. Gehry said construction problems were inevitable in the design of complex buildings. “These things are complicated,” he said, “and they involved a lot of people, and you never quite know where they went wrong. A building goes together with seven billion pieces of connective tissue. The chances of it getting done ever without something colliding or some misstep are small.” “I think the issues are fairly minor,” he added. “M.I.T. is after our insurance.” Mr. Gehry said “value engineering” “” the process by which elements of a project are eliminated to cut costs “” was largely responsible for the problems. “There are things that were left out of the design,” he said. “The client chose not to put certain devices on the roofs, to save money.”