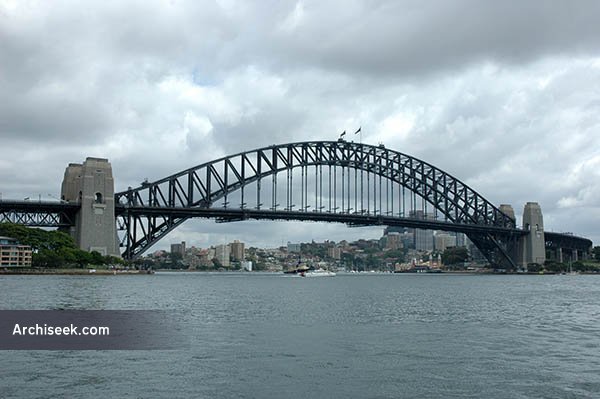 It was as early as 1815 that Francis Greenway proposed building a bridge from the northern to the southern shore of the harbour. It took some time for this to become a reality with design submissions invited in 1900. This was despite Sir John Sulman’s suggestion that a tunnel was a better option. All the submissions were considered unsuitable and so the momentum for the bridge crossing stopped.

However, after the First World War more serious plans were made, with a general design for the Sydney Harbour Bridge prepared by Dr J J C Bradfield and officers of the NSW Department of Public Works. Finally, an international competition was held, with Bradfield suggesting that the design should be an arch bridge with granite-faced pylons at either end.

The New South Wales Government then invited worldwide tenders for the construction of the Bridge in 1922 and the contract was let to English firm Dorman Long and Co of Middlesbrough. The winning design tender by Dorman and Long (recommended by Bradfield himself) proposed the single arch (one of six alternatives) be built from both ends (using cable supports) and joined in the middle.

The Sydney Harbour Bridge construction started in 1924 and took 1400 men eight years to build at a cost of £4.2 million. Six million hand driven rivets and 53,000 tonnes of steel were used in its construction. It now carries eight traffic lanes and two rail lines, one in each direction, but at the time of its construction the two eastern lanes were tram tracks. They were converted to road traffic when Sydney closed down its tram system in the 1950s.

Its total length including approach spans is 1149 metres and its arch span is 503 metres. The top of the arch is 134 metres above sea level and the clearance for shipping under the deck is a spacious 49 metres. The total steelwork weighs 52,800 tonnes, including 39,000 tonnes in the arch. The 49 metre wide deck makes Sydney Harbour Bridge the widest Longspan Bridge in the world.