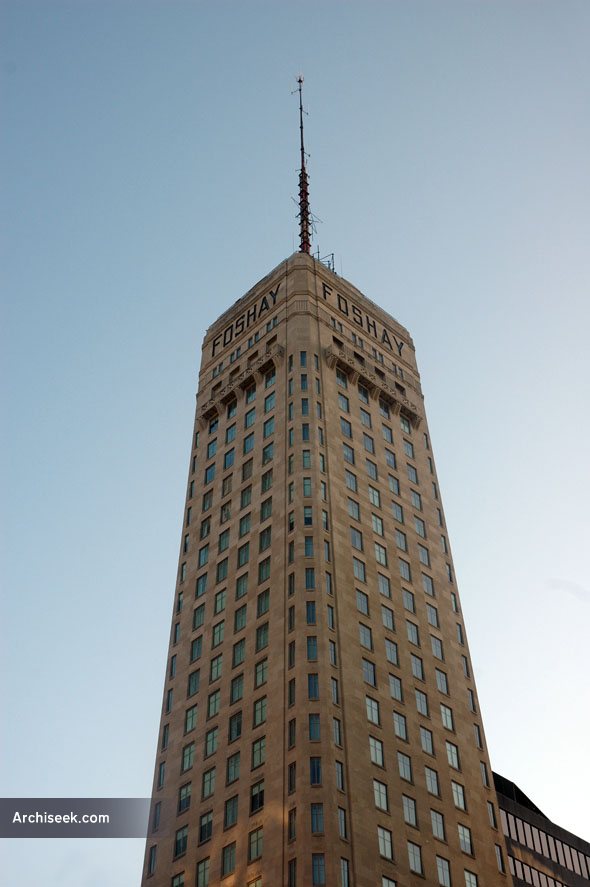 The Foshay was designed by Léon Eugène Arnal, chief designer for the architects Magney & Tusler, later known as Setter, Leach & Lindstrom. Modeled after the Washington Monument, the building was completed in 1929 in the months before the stock market crash in October of that year. It has 32 floors and stands 447 feet (136m) high, plus an antenna mast that extends the total height of the structure to 607 feet (185m). Because the building was designed to echo the Washington Monument, the sides of the building cant slightly inward, and each floor of the Foshay Tower is slightly smaller than the one below it. It is also unusual in that the tower is set back from the street, with a two-story structure surrounding it on the Marquette Avenue and 9th Street sides. The exterior is faced with Indiana limestone, while the interior features African Mahogany, Italian marble, terrazzo, gold-plated doorknobs, a silver and gold plated ceiling, ornamental bronze, hand wrought iron and three commissioned busts of George Washington. It cost US$3.75 million to build. The market crash bankrupted the developer, Wilbur Foshay, six months after completion. The building was added to the National Register of Historic Places in 1978.

Now operated as an hotel – W Minneapolis – The Foshay.