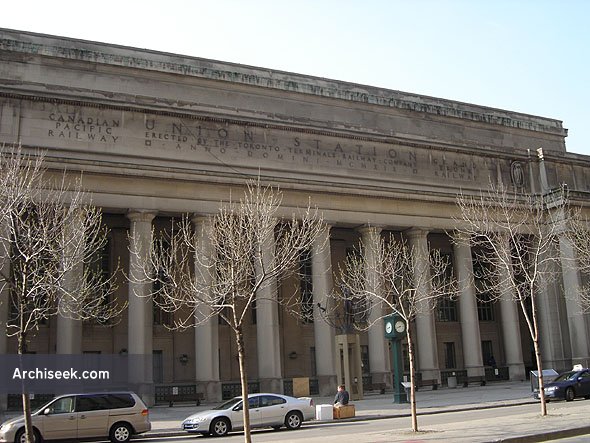 Designed in the Beaux-Arts style, it was the largest and most opulent station erected in Canada – the facade is more than 230 metres long. Its centre-piece is a broad colonnade of eighteen gigantic Greek Doric columns topped by an undecorated cornice which runs the length of the building. Monumental in design, the Great Hall features a coffered vault ceiling of Gustavino tiles. This interior ticket hall is 80 metres long and 28 metres high. The shape of the ceiling is echoed in the four-storey, barrel-vaulted windows on the east and west walls. Mid-way up the north and south walls are carved the names of the cities that were then serviced by the CPR and the Canadian National Railways (CNR), the government-owned railway that replaced the Grand Trunk. The list alternates from side to side, naming the cities from east to west. For some years the east wing was the postal terminal.