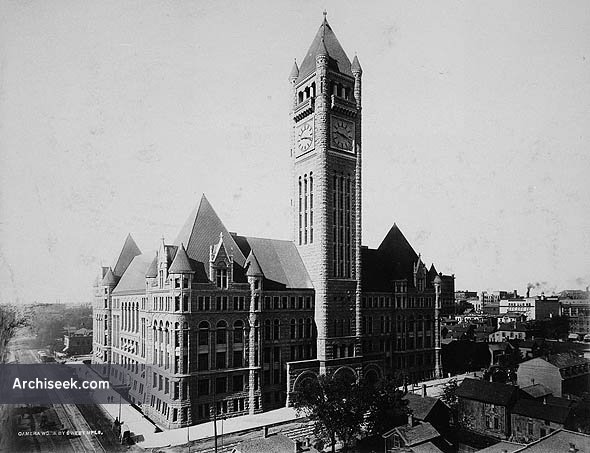 City Hall located at 350 South Fifth Street, is an example of Richardsonian Romanesque architecture, and is based upon Henry Hobson Richardson’s Allegheny County Courthouse in Pittsburgh, Pennsylvania. It was originally constructed with a terra cotta roof. This was replaced in the 1950s with the current copper roof after it began leaking in the 1940s. The tower reaches 345 feet in height, and was the tallest structure in the city until the 1920s. A 15 bell carillon in the tower is played regularly, with noontime concerts provided to the public a few times per week.

Inside, there is a large rotunda including a large sculpture, “Father of Waters,” by American sculptor Larkin Goldsmith Mead who lived in Florence, Italy at the time. It was completed and placed inside the building in 1906. Over the years, many of the larger spaces in the building were subdivided to make more office space. Another building was built in the center courtyard to alleviate space constraints.