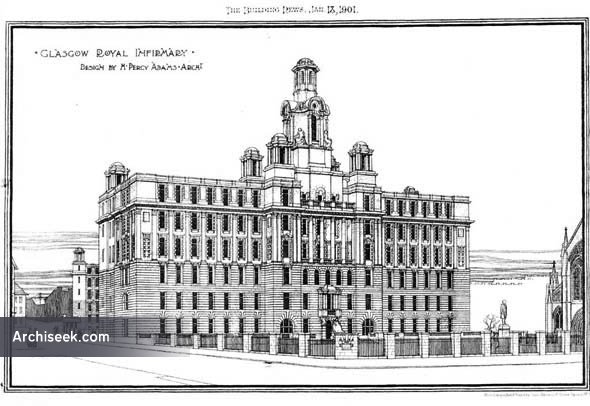 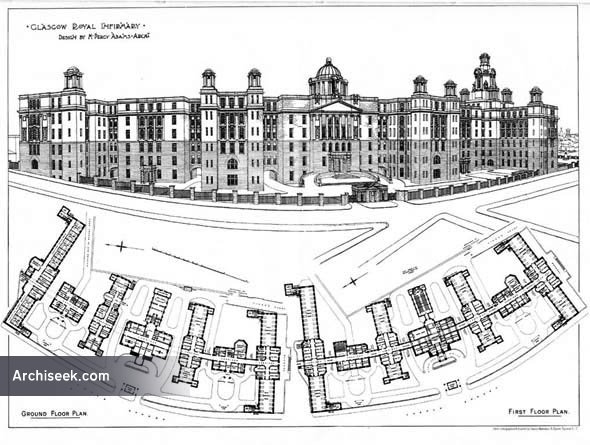 Unbuilt entry in competition to design a new Royal Infirmary. A new building was eventually completed in 1914 to designs by James Miller. Published in The Building News, January 18th 1901.

“We illustrate to-day the designs, by Mr. H. Percy Adams, F.R I.B.A., 2S, Woburn-place, Russell-square, London, for the rebuilding of the Royal Infirmary at Glasgow. As we have previously mentioned, designs were invited by the infirmary committee from six -Scotch and two English architects. The designs of both the latter we have now illustrated. The competition has been an exceedingly unsatisfactory one almost from the commencement, plans being sent to the competitors which were suggestions of what the committee desired. These plans were so terribly at fault that several of the competitors entirely ignored them. An endeavour has been made in these plans to keep to the spirit of the suggestions in designing a hospital divided practically into three parts— comprising a surgical house, a medical house, and a general administrative building situated centrally between them. Each flat of wards was also to have its own medical officers’ apartments, outpatients’ room, and either operating-theatre or lecture-theatre. One great difficulty of the problem set was to design a building having wards on six floors without sacrificing in any way the wards, &c., to the elevations. Several of the designs submitted Ignored this by placing the upper floors of wards in the roofs with dormer windows certainly an undesirable arrangement. The long perspective is taken from an unfortunate point of view, but was made chiefly to illustrate clearly the approaches to the several buildings. The connecting bridges between the buildings are only made 7ft. 6in. high, so as to allow of a blow- through on each floor. The most unsatisfactory feature of this important competition is that the design the committee has selected was not placed in the first four adjudged best by the assessor. Dr. Rowand Anderson. This makes the third large hospital competition decided in Glasgow during the last few months in which committees have ignored the assessor’s recommendations. This case, perhaps, is the most aggravated in that all the competitors were selected by the committee. It seems a pity that the Glasgow architect now selected could not have been given the work without competition, and so have saved the infirmary £S00 in honorariums and an assessor’s fee rumoured at £500. “