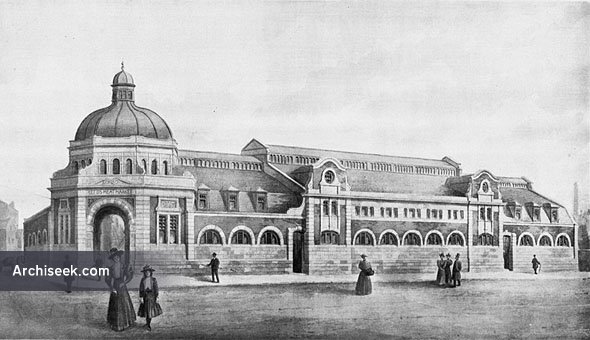 “This design, by Mr. Percy Robinson, Albion-street, Leeds, was awarded the second premium of £50 in the recent competition. The main building, shown in the illustration, abuts upon York-street, and is partially rotuined along Ilarper-street. It forms a large open apartment, 46ft. wide, with a row of stalls on either side and a roadway down the centre. A gallery runs along either side over the stalls, on which are placed small offices. The principal entrance at the junction of York-street and Harper-street is roofed over by an octagonal dome, this treatment being suggested by the shape of the corner. Adjoining the entrance and overlooking the whole of the market is the superintendent’s office. The abattoirs and lairs are placed behind, and parallel to, the market, from which they are separated by a cart-road 18ft. wide. The basement to market is arranged to be used for cold stores, freezing-room, &c., and is connected with the lift. The elevations are brick, with stone dressings ; the internal walls are lined with glazed bricks, and the floors concrete on steel girders. This illustration is reproduced from the original drawing submitted in the competition.” Published in The Building News, December 23 1898.