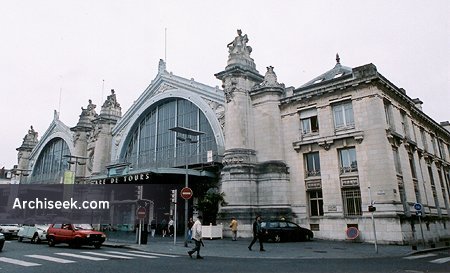 The fabulous railway station was designed by Victor Laloux for the Compagnie d’Orléans railway company. He also designed their terminus in Paris, the Gare D’Orsay. The railway shed consists of two main spans which are expressed externally by the large windows on the main facade. These are framed by ornate decoration containing the names of towns served by the railway company.

Internally the fine open space of the concourse is surrounded by office space. Modern ticket booths and shops have been sensitively inserted into the centre of the space. The walls of the concourse have decorative tile panels depicting places that can be travelled to via the railway. The interior stonework has fine detailing in the cornice and window surrounds.