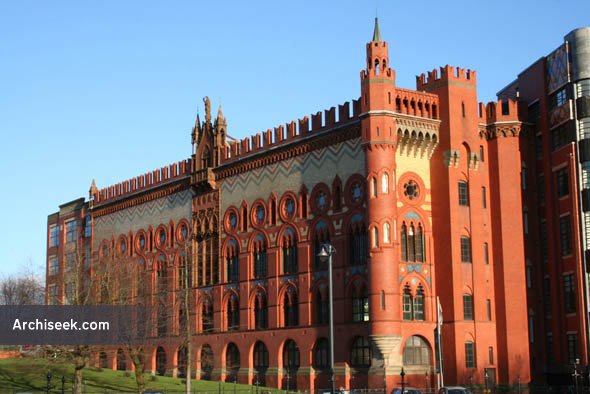 The facade which reflect the facade of the Doges’ Palace in Venice, vividly advertised the oriental dyed wares that were produced within. Behind the facade was a functional mill designed by mill engineers, Messrs J.B. Harvey. After repeated design proposals had been rejected by the city council, James Templeton & Co. employed the architect William Leiper, who designed a facade inspired by the Doge’s Palace in Venice. On 1 November 1889, the factory facade collapsed due to insecure fixings and 29 women were killed in adjacent weaving sheds. A fire in the factory in 1900 resulted in more deaths. The building was extended in the 1930s and in 1984 became the Templeton Business Centre. In 2005, the 1930s extension was demolished to make way for 143 new flats, part of a £22 million regeneration project which saw the owners, Scottish Enterprise, sell the Templeton Carpet Factory for £6.7 million.