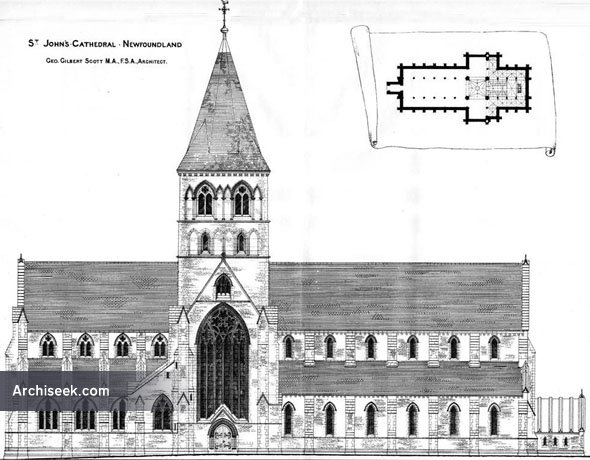 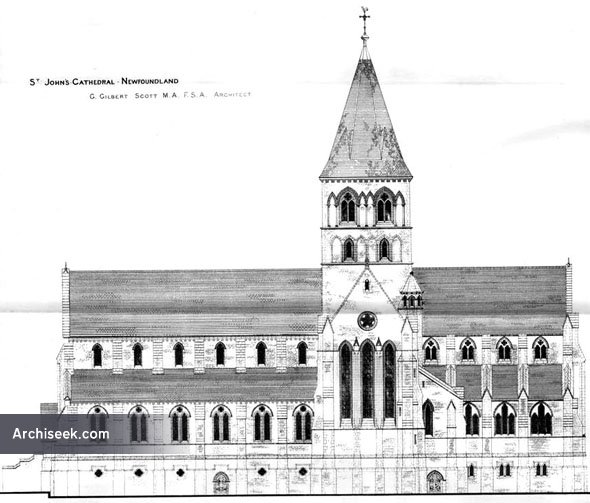 The Cathedral of St. John the Baptist is located in the city of St. John’s, Newfoundland. This parish in the Diocese of Eastern Newfoundland and Labrador was founded in 1699 in response to a petition drafted by the Anglican townsfolk of St. John’s and sent to the Bishop of London, the Rt. Rev. Henry Compton. In this petition, the people also requested help in the rebuilding of their church, which had been destroyed, along with the rest of the city, in 1696 by the French under the command of Pierre Le Moyne d’Iberville. At least six wooden churches stood on or near this site and were destroyed by military operations during the wars between the French and the British which finally resulted in British control of North America.The first stone church was begun in 1843 under the direction of Aubrey George Spencer, the first bishop of Newfoundland, but little progress was made on this relatively modest edifice beyond the laying of a cornerstone before Bishop Spencer resigned due to ill health.

The present Cathedral was begun in 1847 by Edward Feild, the second bishop of Newfoundland. Bishop Feild commissioned plans from the leading Gothic Revival architect George Gilbert Scott, who envisioned a more impressive cruciform structure with varied ornamentation in the twelfth-century English style. The Nave, built between 1847 and 1850, served as the entire Cathedral Church for 35 years.

Construction on the choir and transept section did not commence until 1880 and was completed in September 1885, under the direction of James Butler Knill Kelly. The additions to the nave gave the cathedral the shape of a Latin cross and continued the era of Gothic Revival architecture in the construction of nineteenth-century Anglican churches in Newfoundland.

On July 8, 1892, the Cathedral was extensively damaged in The Great Fire of 1892. The roof timbers ignited, which caused the roof to collapse, bringing the clerestory walls and piers in the nave down with it. The intense heat caused the lead to melt in the glass windows, resulting in the complete destruction of all but two; the sole surviving window can be seen in the Sacristy. Restoration of the Cathedral commenced in 1893, again under Kelly’s direction. By 1895, the Chancel and Transepts had been rebuilt, while the Nave reached completion in 1905. A window in the restored Cathedral was dedicated to Kelly, who died in 1907.

The Cathedral remains incomplete as the structure still lacks the spire which its designer, Scott, had envisaged. Although an engineering team has established that the proposed 150-foot (46 m) tower and steeple is structurally feasible, the cost was estimated to be $3,000,000. The clergy and parishioners remain committed to completing Scott’s plans and are hopeful that they will see the spire erected.The building has been designated as a Registered Heritage Structure by the Heritage Foundation of Newfoundland and Labrador and is listed on the Canadian Register of Historic Places