Facing City Hall on Donegall Square North, the former Robinson & Cleaver store is now subdivided up into various commercial premises. Belfast has quite a few former department store premises which have since been subdivided up. The building with its dominant corner position was designed by Young & Mackenzie and built between 1884-85. The exterior is highly decorative with its ogee domes and towers, decorative carvings and rooftop balustrades. Part of the original signage can be seen over the entrance to Burgerking. 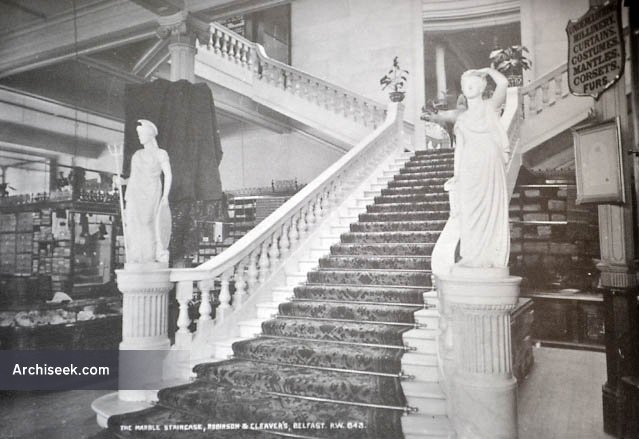 The interior is much altered, its magnificent marble staircase was removed to Ballyedmond Co. Down.

A description of the recently completed works was published in The Irish Builder, March 15, 1888- “THESE premises, situate at the corner of Donegall-place and Chichester-street, by their majestic appearance and refined architecture, not only make the venerable Linen Hall close by look like a mere shed, but, actually dwarf Messrs. Richardson, Sons, and Owden’s imposing block of buildings adjoining-an edifice that has always justly, perhaps, been looked upon as one of the most majestic and boldy-conceived in all the north of Ireland.

The new building has a frontage facing Donegall-place of 77 ft., and one towards Donegall-square of 128 ft. It is six storeys in height, and from the top of the parapet to the pavement it is 85 ft. At each extreme angle are octagonal turrets, covered with sheet copper, and rising 120 ft. from the ground. The turret at the circular angle (i.e., at the corner of the two thoroughfares) is carried up to the altitude of 150 ft., and its ogee outlined roof, like the other two, is covered with thick copper, which, when it tones down and gets blue-green with verdigris, will have a very happy effect. The view from the windows of this tower will be quite a unique one in Belfast, and will no doubt be largely used by strangers, who, disinclined for the long climb of Cave Hill, are still naturally anxious to see the town from the most elevated and easily accessible point.

The lift, which has been placed on the premises by the American Elevator Company, will render access to this elevated point, so that it will be one requiring absolutely no exertion whatever to attain. At the base of this tower, and on a line with the parapet, is the clock, whose dial face measures 6 ft. in diameter. The clock, which is a magnificent specimen of the clock-maker’s craft, and embodies all the latest improvements, is the work of Mr. Francis Moore, of High-street, Belfast. It is supplied with a pleasant musical feature in the shape of Westminster chimes, which will play upon five Harrington tubes. The tones obtained from these are said to be stronger and sweeter than those from any bells.

The fabric, in its entirety, above the ground floor, is built of Scrabo stone—a close fine material, which has much the appearance of grey granite, and is an admirable stone for so dignified and vast a structure. The quarries are the property of the general contractors, Messrs. H. & J.Martin and Co. (Limited), of Ormeau-road, Belfast, and the despatch with which this enterprising firm has erected the new edifice, is a matter of surprise to all, particularly to those who know the exceptional difficulties that had to be overcome-especially in the foundations, which are built on what is nothing more or less than a buried sea of mud.

The style of architecture selected by Messrs. Robinson and Cleaver is undoubt edly what may be defined as Victorian. It is of a classical type, freely treated, and there can be no doubt that there is no style better adapted for modern requirements than this, in a commercial as well as an architectural sense. Messrs. Young and Mackenzie, of Donegall-square, Belfast, have certainly de signed a most imposing building, and the effect of this is heightened, as it stands upon the very best site to be found in Belfast for showing its merits to the best possible advantage. A pleasing feature on the Chichester street side is the recessing of the building above the ground floor; this will afford a delightful promenade in summer time—it is readily gained from any part of the show rooms on the first floor. At the Donegall place corner, the circular tower projects, and blocks the end of this terrace, whilst on the Donegall-place side, it incorporates itself in the main building, and presents a feature at once picturesque and full of powerful conception and design. The gates in front of the two main entrances will rise up direct from the basement. Nearly all the windows are glazed with single sheets of thick plate glass.

Although in so gigantic an establishment it is evident that the first idea of Messrs. Young and Mackenzie has been to give all the dignity consistent with strength and utility, there is still to be seen at every hand an amount of refined delicacy of detail that points suggestively to a new era in the annals of architectural history in Belfast. If we except a simple ornamental treatment of the central tower, executed by the contractors’ men, the upper storeys of the pile are altogether devoid of a greater attempt at ornamentation than is obtained by the judicious use of simple and well-chosen mouldings; the lower storeys, however, are made beautiful by clever examples of the sculptor’s mystic craft. Carved swags of fruit surmount the fluted pilaster columns, and are emblematic of the fruits of the various countries of the world. The stone balconettes on the third floor are supported by sculptured cantilevers formed by Donatello-like chubby-faced and winged figures of boys; between these are a series of carved panels, into most of which the plump forms of nude, or semi-nude children are most happily introduced. These are made to do a manifold number of duties: here holding flax, and there Irish linen; some carry distaffs, whilst others bear shields between them, on which occur the linked monograms of the two spirited owners of the new premises. On the circular corner there are three large panels representing the royal arms in the centre; on the dexter side of these are the arms and supporters of Antrim, and on the sinister side those of Belfast.

The capitals surmounting the polished granite columns to the various windows on first and second floors (and of which there are about one hundred), are all most effectively carved, no two capitals being alike in architectural detail, yet all blending, the one with the other, in the most harmonious manner. The lower pilasters have also boldly carved lions’ heads, the motif for which was a curious old Irish model found some years ago in the neighbourhood of Dublin. The various pediments of the windows on the first floor are carried by life-sized heads, an interesting series of about fifty, and all more or less typical of various people in different countries under the sun, from the cold blooded inhabitant of “Greenland’s icy mountains,” to the dark-skinned native of “India’s coral strand.” But the real power of the sculptor’s art has undoubtedly been thrown into the fine series of busts representing, personally or emblematically, the heads of the principal countries wherein reside the quarter of a million, and even more, customers whose names appear upon Messrs. Robinson and Cleaver’s ledgers. Amongst the firm’s patrons are to be found the names of her Majesty the Queen, the Prince and Princess of Wales, the Crown Prince and Princess of Germany, and the Maharajah of Kulch Belar of India. All these have their heads and shoulders carved in the round, the various busts being of heroic size, and alike striking, both as works of art and as likenesses. There are also busts of the late Prince Consort, of Lady Dufferin (representing Canada); General Washington (representative of the United States); and of a beautiful female, emerging from under a veil, and supposed to be symbolical of Australia. At various intervals in the balustrades, immediately over the shop on the Donegall-square frontage—stone railings which protect promenaders on the long balcony already referred to—are heraldic panels. These are very happily introduced and exhibit a high type of carved work; they represent respectively the arms of the United States, Crown Prince and Princess of Germany, Royal Arms, and those of the cities of London, Edinburgh, and Dublin. The sculpture and carved work upon the exterior of the main building has been carried out by Mr. Harry Hems, sculptor, of Exeter.

The interior of the building suggests, to even the most unpractical eye in things of this sort, what an amount of careful thought and planning everything, however minute and passingly unimportant, has received at the hands of Messrs. Young and Mackenzie. On the ground floor the massive white marble staircase, that communicates by easy risers and treads with the floor above, is a beautiful and sumptuous feature. It is the work of Messrs. Robinson and Son, York-street, Belfast. The polished marble balustrades are very massive, and of chaste outline. The shop front and all the counters and internal shop-fittings are, in the main, of polished teak and mahogany. The entire edifice will be warmed by steam heating, and will be lit by electric light, erected under the direction of Mr. J. H. Greenhill, of Belfast.

In one corner of the vast pile is a wide circular stone staircase, communicating from the top storey, in turn, with every floor. This is built entirely fire-proof, and will be used as a fire-escape exit in case of need.

The two first floors will be used as showrooms, and the upper ones as Messrs. Robinson and Cleaver’s offices. The packing and despatch of goods will be carried on entirely in the basement; this lies lower than th line of drainage of the town, but, by clever contrivance and management, is quite cut off from connection with anything outside the building. Here also the machinery for the electric light is fixed.

The entire cost of the undertaking will be little short of £50,000. The contractors’ foreman throughout the job has been Mr. William Montgomery. The whole of the scaffolding is now cleared away, and it is expected that the premises will be ready for occupying in a couple of weeks.”