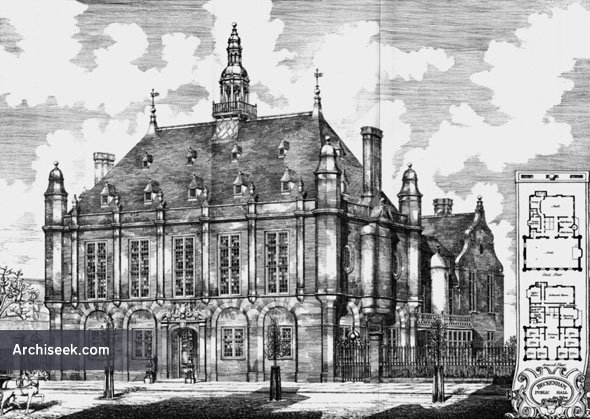 The design for the building was commissioned by the Beckenham Public Hall Company from the architect George Vigers of Old Jewry. The chairman M.J. Sturges and the Hon. Secretary Alfred Wright are named on the foundation stone, which was laid on 13th October 1883 by Sir Charles Mills. The builders were D.D. and A. Brown. As part of the ceremony a copy of the Times of that date and a specimen of every coin of the realm were placed in a hollow stone.

Beckenham Public Hall is described in the Grade II listing document as an excellent building in playful Arts and Crafts style. Five bays with central entrance. Two storeys and attic. Large second storey windows divided by shafts dominate facade. Steep roof above with two tiers of very small dormers; five to lower tier, four above. Corner turrets corbelled out at first floor level. Round headed windows to ground floor, yellow brick with red brick dressings. The Tile Roof [constructed of] red and yellow brick. Tall roof with perky dormers in two rows and a lantern (since removed). Angle tourelles with lead caps. Semi-octagonal pilaster strips between the windows. Striped arches at the bottom. All done with a liveliness and freedom that mark the nineties rather than the eighties of the last century. Published in The Building News, October 2nd 1885.