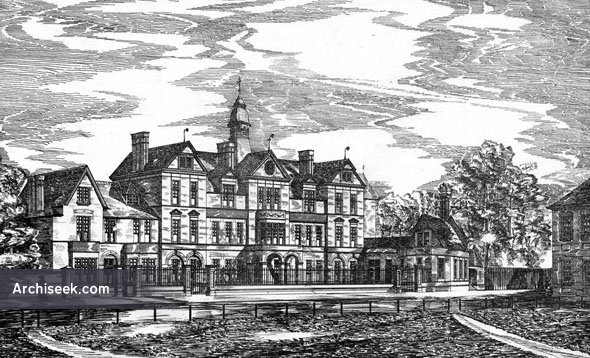 In 1865 a Dr Laseron decided to found a hospital where ladies could be trained to nurse the sick poor. Thus, the Evangelical Protestant Deaconesses’ Institution and Training Hospital opened in a converted cottage in 1867. Its first Superintendent was a Deaconess from Kaiserwerth (these Deaconesses also ran the German Hospital in Dalston). Mr John Morley, a City merchant, donated a Georgian property – Avenue House on the east side of Tottenham Green – to the Institution and it moved there in 1868. Avenue House was replaced in 1881 and, in 1887, further extensions were added, including the John Morley Wing. The Prince and Princess of Wales (later King Edward VII and Queen Alexandra) visited the Institution and opened the new buildings. In 1899 the voluntary Deaconesses were replaced by paid nursing staff. The Institution was renamed the Tottenham Hospital and it became a district general hospital. By 1983 the Hospital had largely closed.In 1993 the 4-storey red brick building was converted to provide 38 apartments. It was renamed ‘Deaconess Court’.