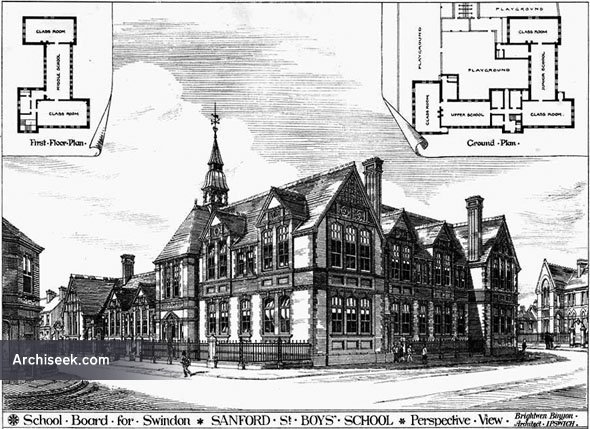 “These schools have been erected for the Swindon School Board in the Now Town, to accommodate 794 boys. They are one of a series of schools erected by the Board to meet the educational needs of the Old and New Towns. The school is divided into three sections, junior, middle, and senior, with separate entrances and cloak-rooms, also separate play -grounds, play-sheds, and offices for each division. The head master’s room is placed so as to give immediate access to all three, and commands the main entrance. The middle school is placed on the first floor above the junior school. The schools are built of local bricks, the facing being of a yellow grey brick, like London stocks, from the neighbouring parish of Dauntsey. The arches, quoins, and dressings are of thin, red bricks, specially made by Mr. Turner, of Swindon, working five courses to four of the backing. The name of the schools is arranged in a deep red, terra-cotta panel over the entrance. The dormers are also enriched with terra-cotta panels, the date of erection, 1880, alternating with the monogram S.S.B. The roofs are covered with Wilkinson’s tiles. The schools are heated entirely by open fire-places, fitted with Elsey’s patent warm-air grates, and ample ventilation is provided by Tobin tubes in every window sill. These are fitted with sliding covers ; the upper part of the windows are hinged to open in inwards, and are fitted with Elsey’s patent levers. The lower parts of the windows are arranged as double hung casements. The buildings have been erected by Messrs. D. C. Jones & Co., of Gloucester, from the designs of Mr. Brightwen Binyon, A.R.I.B.A., of Ipswich, at a cost of £5, 143, including all fittings.” Perspective view published in The Building News, December 9th 1881.