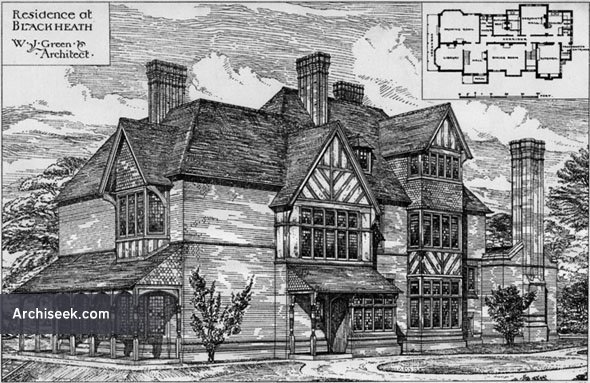 “This house, which has been recently erected for Mr. J. F. Green, of Blackwall, is situate on a portion of the estate of the late Mr. J. Mun. The walls are of red brick, with red and black tile hangings, and the roofs are covered with dark tiles, parts of the exterior being in half- timbered work. The principal staircase as well as the whole of the internal wood-work of the dining, drawing-rooms and library, is executed in American walnut wood, the ceilings being carried out in the same material with panels in low relief. The windows are glazed with lead lighting throughout, with ornamental glazing in the upper part of the drawing-room lights. The entrance-hall is laid with parquetry. One- special feature of the design is the position of the kitchen, which has no rooms over, and the flue from which (with a large ventilating flue adjoining) is boldly carried up in the front. The works were carried out by Mr. Havill, builder, of Lee, from the designs of Mr. W.J. Green, architect, of London. Our illustration is taken from a drawing by Mr. G. R. Julian, which was exhibited at this year’s Royal Academy Exhibition.” Published in The Building News, December 16 1881.