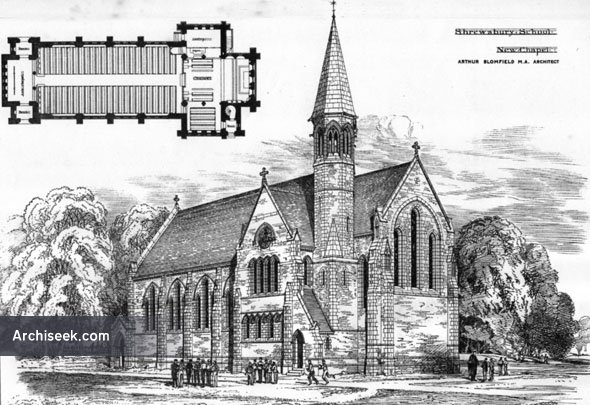 Perspective View including plans published in The Building News, July 29 1881. “The grammar-school at Shrewsbury will shortly be removed from its present quarters to a new bite on the other side of the town, overlooking the Severn, opposite the quarry. Here it will occupy an old building, which was originally designed in the la>t century for a foundling hospital, but is now being altered and adapted to its new purpose. A head-master’s house, and two under-masters’ houses (the latter by Mr. William White, F.S.A.), are also in process of erection on the same site, which affords ample space besides for playground, cricket-field, and other necessary adjuncts of a large school. The buildings .are all of red brick, but the governing body have decided that the chapel, which is not yet built, shall be of stone, the cost being limited to £7,000. Of this sum, 3,000 has be( n raised for a memorial to Dr. Kennedy, the late distingnished head-master. It was stipulated that the memorial should form some distinct and definite portion of the building, a proviso with which it would have been difficult in a college chapel to comply. It was decided, however, to seat the building as a church, and a chancel, which thus became a necessary feature, naturally met the requirement. The building has been designed to bring each portion within the stipulated limits of cost, and will, when complete, accommodate 200 boys besides the masters, their families, and a limited number of visitors. The old screen and pulpit, and such other fittings as can be re-used, will be retained in the new chapel. The chapel will stand on the west side of the school-building.”