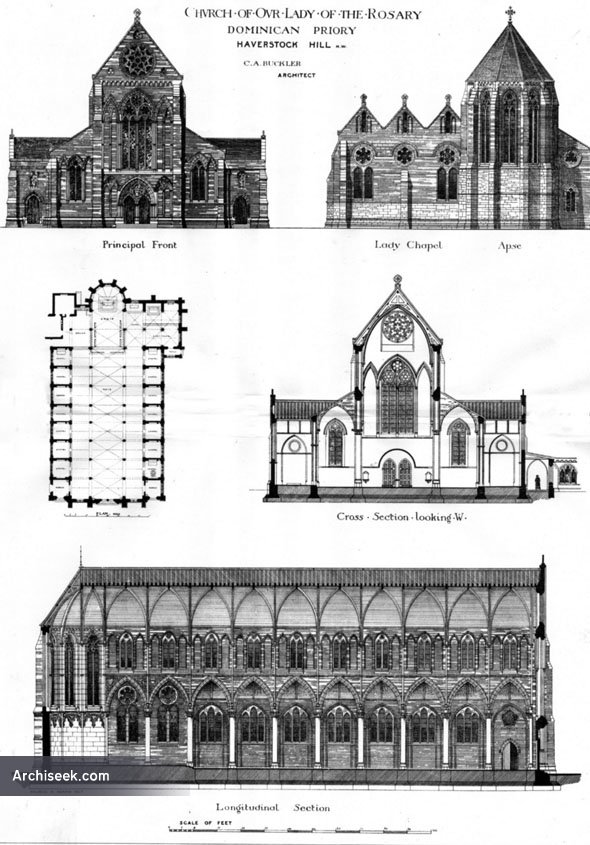 The church, mainly built of brick, in the style of the 13th century, consists of a nave and choir terminating in a polygonal apse, with lofty windows of two compartments, the aisles flanked with fourteen side-ohapels, according to the prevailing type of the larger Dominican churches. The interior length is 200ft., the nave, of eight bays, being 140ft., and the choir 60ft. by 30ft. in width, under one roof ; the height from the floor to the wall-plate is 60ft. The roof is arched and boarded, with transverse and diagonal ribs. The aisles are 16ft. in width, spanned by stone arches, and the fourteen lateral chapels 15ft. each, with a gable and triplet window. The arcaded clerestory is supported on lofty stone columns and arches, and has a light gallery of iron. The Lady-chapel, built, like the choir apse, on the ashlared walls of the original plan, commenced by the late Mr. Gilbert Blount, is approached by an external porch, and connected with the north aisle of the choir. It has clustered columns, stone springers, timber groining, and three deeply-recessed brick arches for the altars, coupled lancet windows, and six-foiled circles over them. The principal front of the church has a double doorway to the nave, surmounted by a quatrefoil for a sculptured group, and foliated spandrels, flanked by the porches of the aisles ; a lofty window of four compartments, with geometrical tracery, and a large rose window in the gable over, which is open to view in the nave, within the arch of the roof. The work has been carefully executed by Mr. E. W. Kelly, of Windsor, builder, from the designs and under the superintendence of Mr. Charles A. Buckler, architect.