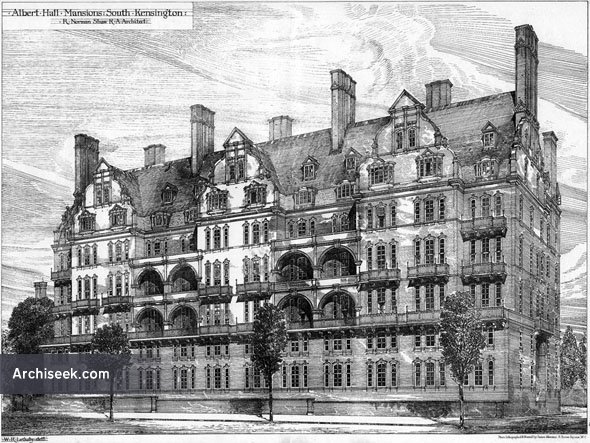 “This building, which has lately been erected in Kensington, is situated close to the Royal Albert Hall. Its scheme, being somewhat complicated, and therefore difficult to ex- plain without diagrams, we publish herewith plans of two floors and a section, which will make clear the arrangements. On referring to the section, it will be observed that the front or north side is divided into seven stories, whilst the back portion has nine floors in about the same height. The object of this is to place the whole of the principle or reception-rooms so as to overlook Hyde Park, and by the lesser number of stories to obtain greater height, whilst the back of the building being occupied by bed and dressing rooms, kitchens, &c., a less height, such as 10ft. 6in. or 11ft., is for all practical purposes as good; and by this arrangement a considerable amount of accommodation is gained. The variety of levels which thus arise make the plans, unassisted by a section, difficult to understand. The portion already built, and shown in our perspective view, consists of three entirely separate blocks. In each block are eight large separate suites, and in the upper part eight smaller suites, which may easily be altered into four larger suites, if desired. Each of the larger suites is complete in itself, with front door opening from the principal stair, and back door from the service stair. Two lifts are provided : one for passengers, and one for coals, provisions, &c., situated close to the tradesmen’s entrance.

It will suffice to describe two floors, as all the others are very similar. The ground-floor consists of outer and inner entrance-halls, dining-room, and drawing- room, each -2911. by 17ft. ; three bedrooms and w.c. on same floor. A private stair leads up to three bedrooms, bath and linen room, w.c, &e., on entresol. In the basement, also reached by a private stair, is a kitchen and scullery, pantry, two bedrooms, larder, and coal-cellars. The rooms belonging to the ground-floor suites are marked in the plans and section by the letter A. The suites on the first floor have each outer and inner entrance -halls, a drawing-room, 29ft. by 17ft., and a dining-room, 2lft. by 17ft., two bedrooms, and a dresssingroom on the same floor, and a private stair leading down to a kitchen, pantry, bed and dressing room. The rooms of this suite are marked B on plans and section. On the section the letter C shows the rooms of third floor, and D those of the fourth. Ample cellarage and spare rooms are provided for all the suites in the basement. The whole of the work has been carried out by Mr Thomas Hursey, of High-street, Kensington, from the designs of Mr. R. Norman Shaw, R.A.”