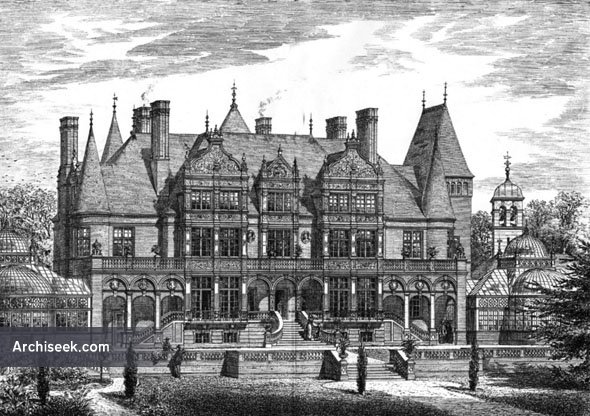 Westwood House started life modestly around 1720 as an Inn but was developed and redeveloped over the years culminating in John Loughborough Pearson’s design for Henry Littleton in 1881. Henry had made his fortune from Novello’s the music publisher and Westwood House and its Music Room played host to the musical stars of the Crystal Palace. Dvorak and Liszt both stayed and played at Westwood House

Westwood House later became the Passmore Edwards Teacher’s Orphanage and was demolished in 1952 to make way for the Lewisham’s Sheenwood council estate. Westwood House had a grand parade which closely follows the line of today’s Sheenewood from its entrance opposite Jews Walk to its exit in Sydenham Avenue (now Lawrie Park Avenue).

“Mr. J. L. Pearson, R.A., is the author of this most interesting and able work. His geometrical drawings of the same building were exhibited this year at the Royal Academy, while our illustration to-day is taken from the view which formed so conspicuous an exhibit at the same gallery a year or so ago. The work is now in course of erection, and consists in the recasting of an old house, to which considerable additions are also now being made. As an example of Renaissance design from the hands of one of our most eminent and exclusively “Gothic” architects, this illustration is of special interest.”

From The Building News, September 22 1899: “This beautiful mansion was erected from the designs of the late J.L. Pearson, R.A., twenty years ago. Tomorrow it will be opened by the donor, Mr. Passmore Edwards, as an orphanage for the National Teachers’ Union, the buildings old lovely grounds forming the property having been purchased by the Teachers” Union through the liberality of Mr. Edwards. The interior is elaborately fitted-out in mahogany and hardwoods, the great feature of the house being the music saloons added to the west side of the mansion since the view herewith given of the garden front, from the pen of Mr. A. Haig, was made. This saloon has a minstrel’s gallery in it, the whole of the detail being of the richest description. The principal staircase is ornamented by sculptured figures on the newels.

The doors of the chief apartments arc in mahogany, delicitely detailed. Externally, the work is in red brickwork, with carved panels and gables. The winter gardens, with their domical roofs, form a great feature in the composition, and the garden terraces add much to its dignity. The stable wing is marked by the belfry tower seen in the view. Besides a new system of drainage and some works of adaptation and repair, little has been done, but during the past few months the place has been in the hands of the builders. The entrance-front is approached by an avenue, and the portal is flanked by two round pavilions of elaborate design. The perspective view, reproduced to-day by the courtesy of Mr. Frank Pearson, was shown in the Academy in 1880.”