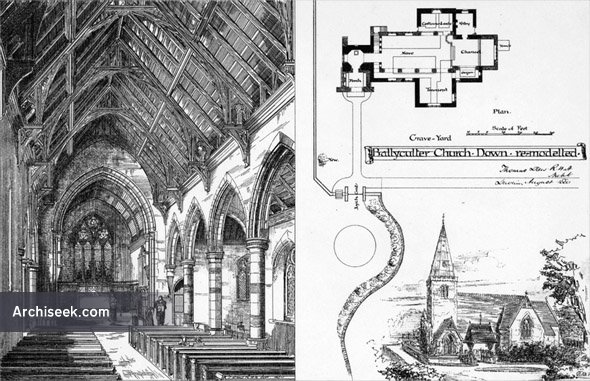 The original church was built in 1629 by Valentine Payne and there is an inscription on the bell to Elizabeth Payne, wife of Valentine. It was restored – renovated by Sir Thomas Drew during 1880-82. The remodelling (new nave, chancel, and transepts) was carried out for 5th Viscount Bangor in memory of Lady Bangor. Re-consecrated 13 April 1882. Image published in The Building News, November 19th 1880.

The lych gate, built in 1888, a gift of Admiral Ward, is a distinctive feature of the church. It’s a roofed gateway where the coffin awaits the arrival of the clergyman for the funeral service.

“The usual type of country church found throughout Ireland is not interesting, to say the least. It is a barn-like, poverty-stricken building, mean in its materials, and with no greater pretensions to architectural character than it can assume on the strength of some Carpenter’s-Gothic wooden mullioned windows, with cast-iron lozenge-shaped glazing, rough dashing without, plain plastered walls within, and a flat plastered ceiling. The existing church, sho»n as remodelled in the illustration, is no exception to the rule, being an ill-proportioned, cruciform structure, with a rude tower and rubble-built spire. It has been desired to transform it into a building worthy as a memorial of the late Dowager Countess of Bangor, without obliterating all remnants of the old church, in which she was interested during a long life. Some ingenuity has been exercised in wholly changing the plan and proportions, while pre- serving the existing walls. The centre-line of the nave has been shifted over to the north 2ft., dividing the old east end into chancel and organ- chamber, and extending eastward, while an arcade is introduced on the south side, with an aisle- passage outside it. This leaves the old south transept »f its present dimensions, while the north transept is curtailed into a side -chapel for the Bangor family. The tower at the west end will, under the altered plan, not come in centrally with the nave ; but by introducing a ringers’ gallery, or screen, at the west end, formed by a double arch, the irregularity is provided for, one arch central with the tower being the entrance, and the other forming a baptistry. This arrangement does not appear upon the sketch-plan, as it is to be executed. The materials used will he Bath Corsham Down stone for the interior ; red Dumfries stone for exterior, and red tile roof. The contract has not yet been let. The architect is Mr. Thomas Drew, R.H.A., of Dublin, diocesan architect for Down, &c.” Published in The Building News, November 19th 1880.