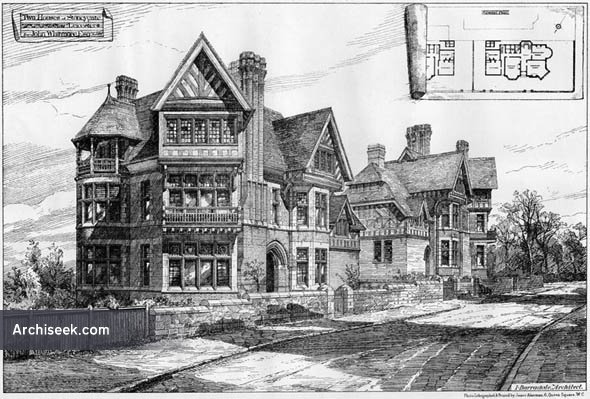 “We this week illustrate a perspective view of these houses, taken from a drawing exhibited in the Royal Academy this year, designed by Mr. Isaac Barradale, F.R.I.B A., Leicester, for John Whitmore, Esq. Objectionable buildings on the south, and a northern aspect have necessitated various-shaped windows in order to obtain sunshine, and the extensive “views to the east and west. Red Whilwick bricks have been used for facing on all fronts of the buildings, and red Dumfries stone for the window dressings. The roofs are covered with strawberry-coloured Broseley tiles, with red Maidenhead ridges, and the cove to the eaves is formed with plaster. The timber framing is red deal, carefully selected and coloured with Stockholm tar. Including granite walling and gates, the cost will be about £.5,400. The works have been very creditably carried out by Mr. Nicholas Elliott, builder, Leicester.” Published in The Building News, November 7 1879.