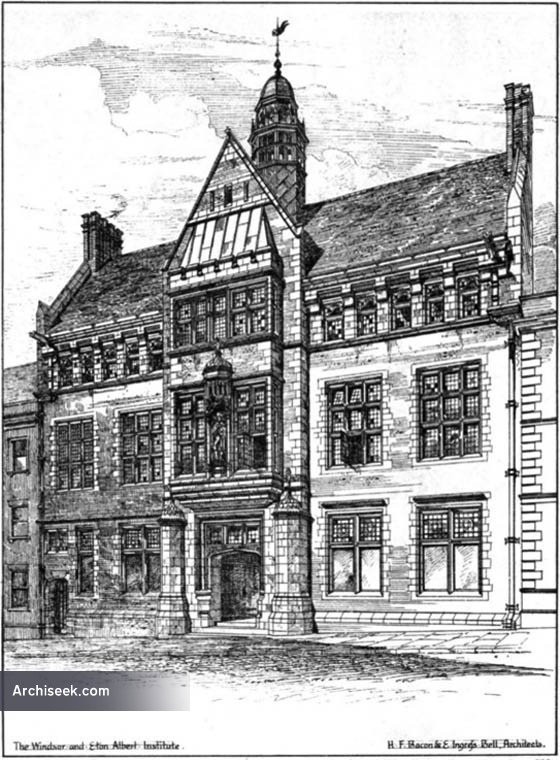 From Marshall’s Guide to Windsor dating from the earliest years of the reign of George V, the following description: This handsome building was erected as a memorial to the late Prince Consort, at a cost of about £6,000. It is situate in Sheet Street, and is constructed of red brick with stone dressings, in the style of the English gothic architecture of the 15th century. It has a frontage of 90 feet, and contains a: large Concert or Lecture Hall, 33 feet by 66 feet, Reading Rooms, Library, Museum, Art and Glass Rooms, Ladies’ retiring rooms, lavatories, etc. The Foundation Stone was laid by Prince Christian, March 28th, 1879, and the building was opened by the Prince of Wales, January 10th, 1880. The Statue of the Prince, which formerly stood in a niche over the entrance, was removed to the large hall to save it from exposure to the weather. It is a splendid work of art, by Signor Romanelli, of Florence. It stands on a small pedestal, and is nearly six feet high; the position is calm and dignified, and the face is full of expression. The Prince is sculptured in white Carrara marble, dressed in the habiliments of a Knight of the Garter. A stone replica now occupies its former place. Demolished in 1977.