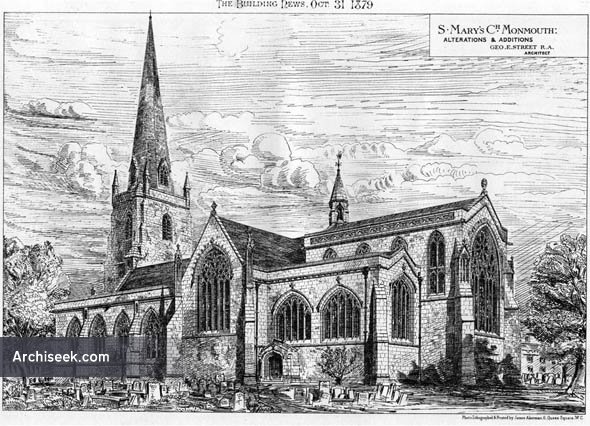 Published in The Building News, October 31st 1879. Originally founded in the 11th century, with parts of the existing church constructed in the 15th century, it was almost completely rebuilt by George Edmund Street in the late 19th century. Street’s structural report of 1879 was dismissive: “it might be said to have no style at all, at any rate it is extremely unattractive and uninteresting.” His original intention was complete demolition and rebuilding, but the estimated cost of £22,000 was too high and he was limited to reconstruction, in which two walls of the Georgian nave and the 1743 steeple were retained.

From The Building News, October 31 1879: “The church of St. Mary, Monmouth, is a building of no architectural talent whatever, tacked on to a fine steeple. Its internal arrangements are very inconvenient, and insufficient for the wants of the parish. It is intended, without removing the old walls of the present nave, to make various alterations in them, to put new arcades and roof, and to add transepts and a chancel to the end of the existing church, thus very largely increasing its area, and adding both to the accommodation, and also to the architectural importance and character of the edifice The work is likely to be commenced forthwith.”