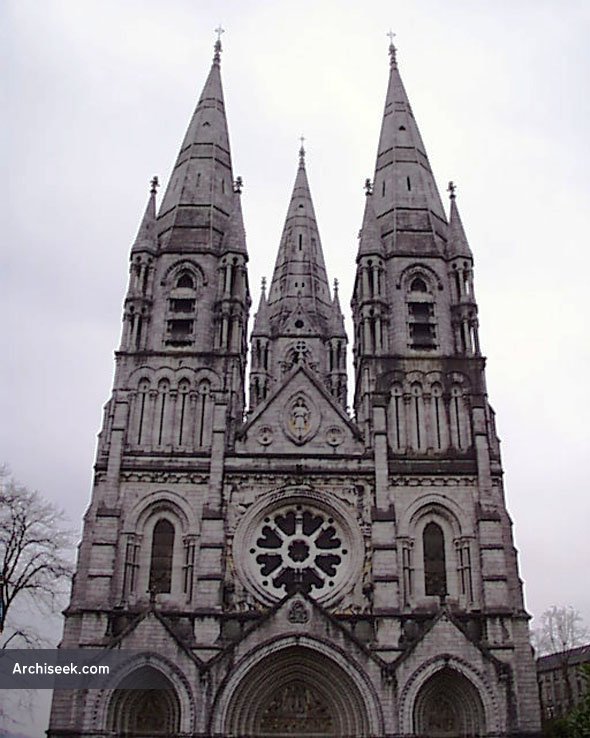 Sited on a hillside above the south channel of the River Lee, St Finn Barre’s Cathedral is a miniature cathedral but a decorative giant. The exterior of this quite small cathedral is dominated by the three spires, two on the west front, and one over the crossing of the nave and transepts. The building was the unanimous result of an architectural competition held in 1862.

The exterior is very ornate, the architect William Burges was an enthusiast of 13th century Gothic architecture and this building is the realisation of his dream. All aspects of the designs was controlled by Burges. All the designs for the external sculpture was modelled by Thomas Nicholls in London and brought to Cork to be copied by a team of masons based onsite. Accordingly the exterior is covered with gargoyles of all sizes and descriptions.

The west front is dominated by the twin spires, rose window and three main entrances. Each of the doorways is flanked by statues of various saints and has a sculpted tympanum. 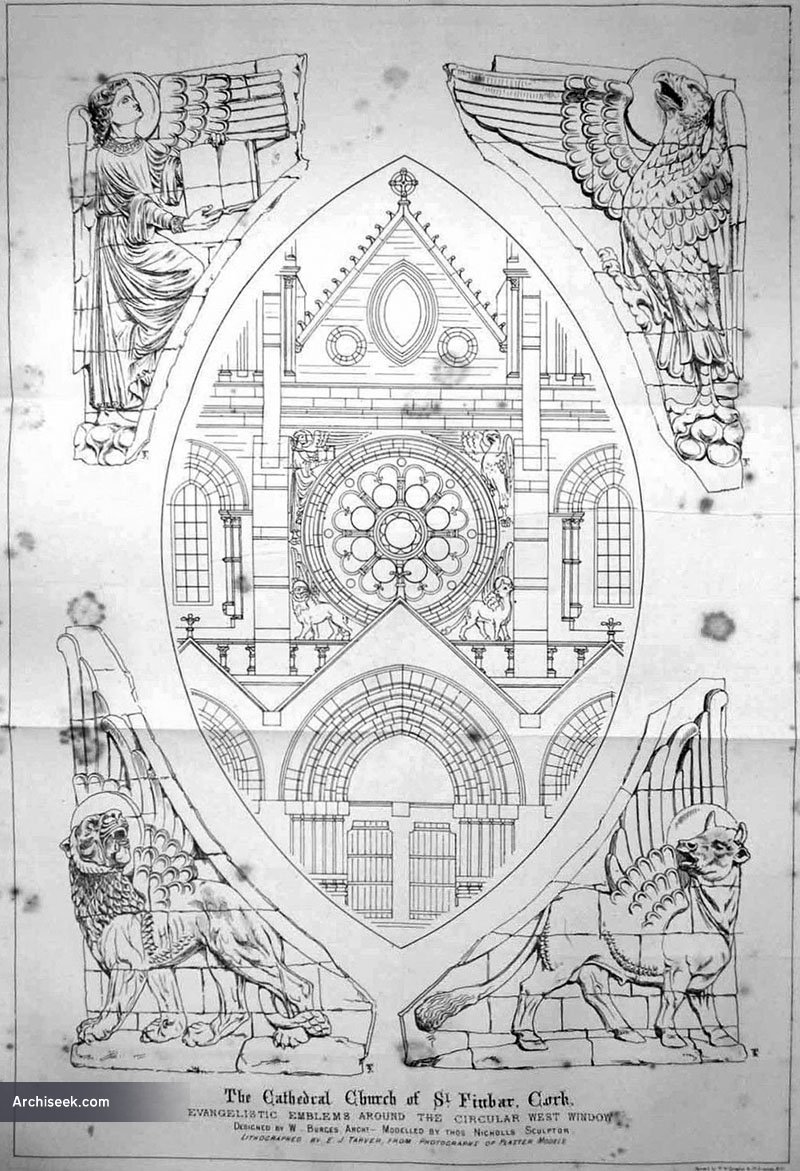 The west rose window is surrounded by four stylized angels while smaller gargoyles (above left) decorate the exterior of the exposed crypt along Bishop Street. The interior of the cathedral is equally decorative with a huge amount of decorative features squeezed into a space that barely contains 700 people.

On entering the cathedral, the eye is immediately drawn to the elaborate apse with its golden hues and decoration. Every available inch of the eastern end is decorated with paint, mosaic and gilding. The ambletury which surrounds the apse gives glimpses through arches and ironwork to the golden ceiling above.

In addition to the decoration applied to the walls and roof, the apse and transepts of the cathedral have many decorative mosaics, stained glass and fixtures. These features combine with the structure of the building to create an elaborately decorated whole.

Whilst the apse and crossing are elaborate decorated, the nave of the church receives a plainer treatment, the stonework and sculpture remaining unpainted or ungilded. The capitals of the columns are the size that you would expect in a larger cathedral, unfortunately the shafts of the columns are half the height that the scale of the capitals would demand.

Some images are from the Irish Builder, Vol.13, 2 January 1871, showing details of the carvings of the rose windows and west tympanum, as well as a perspective of the building in 1871 before the spires were completed in 1879.

Mosaic details are from The Building News, February 20th 1880. “We regret that we have been unable to give an illustration of the pavement itself of the chancel at Cork Cathedral before the mosaics illustrated this week. The weather, and other causes beyond our control, have prevented the completion of the other drawing, which will, with the permission of Mr. Burges, be given .shortly. The artist of the designs now given was Mr. H.W. Lonsdale ; and the mosaics were executed by Messrs. W. H. Burke and Co., of Newman-street, Oxford- street, for the architect of the cathedral, Mr. W. Burges.”