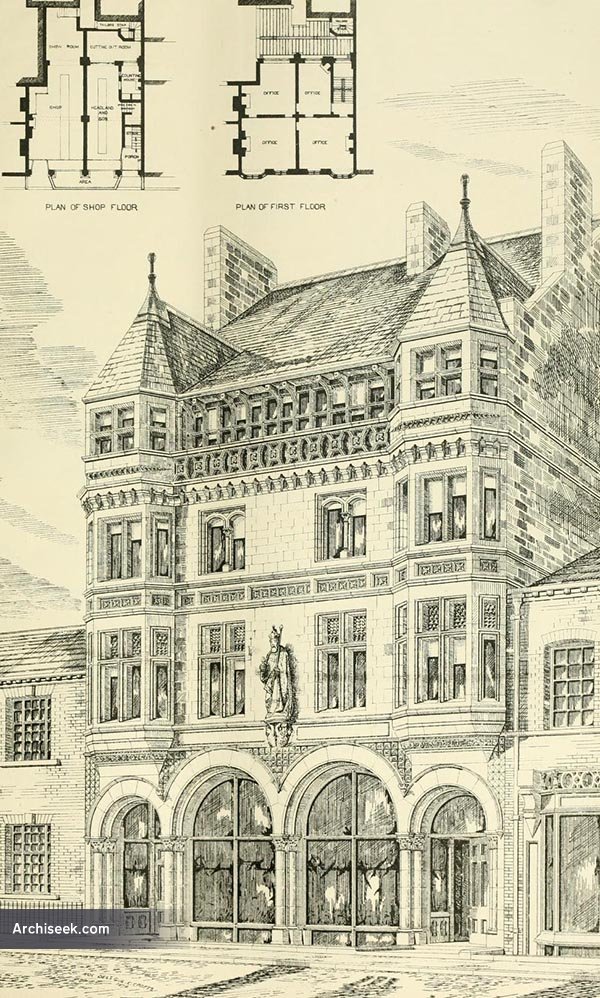 “The building shown in our illustration was completed in the early part of this year, and has been erected from the designs of Mr. George Corson, architect, of Leeds. The accommodation provided for the tailoring business of the proprietors, Messrs. Headland and Sons, consists of a shop, cutting-out room, and office on the ground floor, a show room on the basement and tailor’s workroom, housekeeper’s rooms, and a dining-room for Messrs. Headland, on the top story. A separate stair at the back, communicating with Basinghall-street, admits the work- men to their room, and to the cutting-out room. The parts let off comprise a large shop on ground floor, with show room below, four offices on the first floor, and four on the second. Harehills stone is used for the front, but that part of the top story between the bow windows is constructed in wood. The upper part of the trausome windows is filled -with glass in lead ; and the lead is gilded externally. The brick and mason works were done by Mr. E. Booth- man, the joiner work by Longley Brothers, slating by Watson, Wormald, and Co., plumbing by Joe Lindley, plastering by Richard Pearson, painting by Jackson and Co., and carving by Mawer, all of Leeds. The wrought- iron gates and railing to the area were made by Robert Sones and Co.” Front Perspective View including plans as published in The Building News, October 3rd 1879.