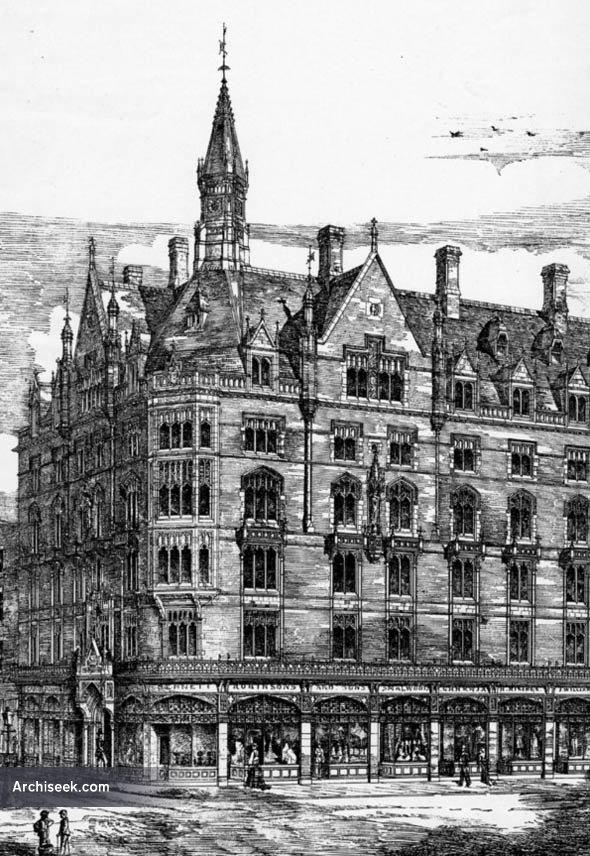 Commercial premises by Bateman & Corser, and published in The Building News, October 10th 1879. “The Manchester Hotel, Aldersgate-street, London, was opened last week. It is situated at the corner of Aldersgate-street and Long-lane, opposite the Metropolitan Railway Station, and within a few minutes’ walk of the General Post- office, the Bank of England, the Royal Exchange, and the Metropolitan Meat Markets. The photo-lithograph represents the Aldersgate-street front, and a portion of the return side to Long-lane. The building, which is seven stories high, including the basement, is designed in the Gothic style of architecture. The outside of the building is built with red bricks, and finished with stone dressings ; the roofs are covered with green slates. The entrance is in Aldersgate-street. On the ground-floor is spacious corridor and hall with manager’s office and porter’s room near to the entrance ; coffee-room -2Oft. by 32ft., writing-room 35ft. by 28ft., which can also be used for a dining-room ; smoke-room 60ft. by 21ft. , lavatories, and other conveniences. The whole of these rooms are very elegantly fitted up with every comfort, well lighted and ventilated. The upper floors are approached by a handsome stone staircase from the basement to the top of the building. On the first-floor are public and private billiard-rooms, sitting-rooms, and bedrooms. The upper floors contain bed- rooms, in all upwards of 200, with service-rooms on each floor. The kitchen, which was originally planned at the top of the building, is in the basement, and fitted up with the best and most approved fittings. The culinary offices adjoin the kitchen, all of which are well lighted and ventilated, and face Cloth-.street. Leading from the entrance-hall is a staircase, communicating direct with the Aldersgate-street Railway Station by underground passage, by which visitors may go from the trains to the hotel under cover, a distance of a few yards only. At the corner of the building in Long-lane is a buffet with grill-room and dining-room over. The remaining ground-floor fronting Aldersgate-street and Long-lane is divided into shops, as shown by the view. The architects were Messrs. Bateman and Corser, of Birmingham, and the builder Mr. W. Brass, Old-street, City.