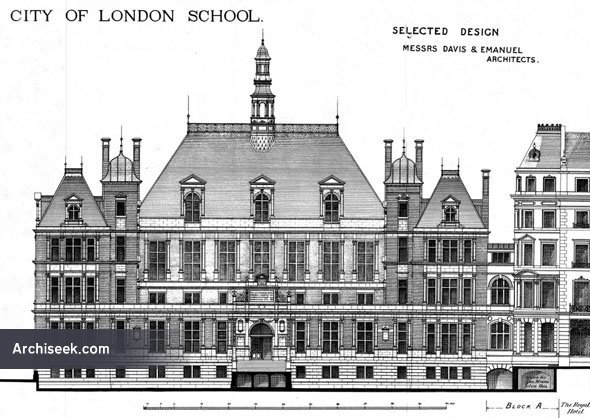 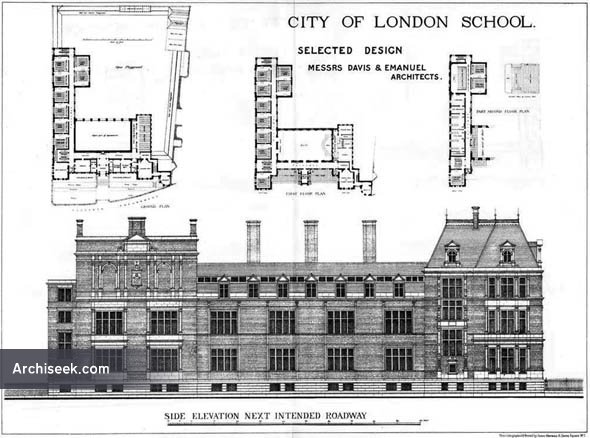 The City of London School eventually outgrew its original site. While many public schools moved away from Greater London in the late Nineteenth Century, a joint decision was made by the school’s management and the school committee to stay in the capital as it was deemed a stimulating environment for education by many. By a further Act of Parliament (the City of London School Act 1879), it was empowered to move to a new site at Blackfriars on the Victoria Embankment overlooking the Thames (still in the City of London). The school moved in 1883 and the new building was opened by the Prince of Wales, (the future Edward VII).

Elevation Facing the Victoria Embankment published in The Building News, August 15th 1879. Side Elevation & Plans published in The Building News, August 22nd 1879. “The design for this building, to which the first premium of £300 was awarded, is by Messrs. Davis and Emanuel, of Finsbury-circus, who are engaged to superintend its construction. We gave a block plan and a full description of the building in our issue of June 1.3, and shall publish next week the side elevation, together with groined plan, first-floor plan, and part of second- floor plan. The style is French Renaissance of a moderate type, the materials to be used in construction are red brick, with Ancaster Stone dressings, with green slates for the roofs, and the estimated cost, exclusive of fittings, is £31,000.”