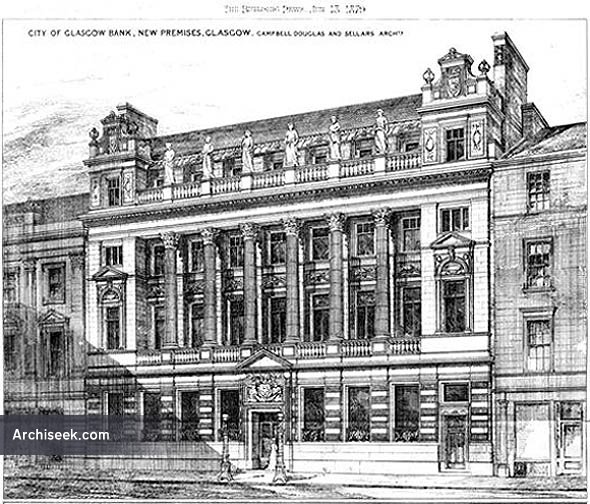 The City of Glasgow Bank is now largely known for its spectacular collapse in October 1878, ruining all but 254 of its 1,200 shareholders, whose liability was not limited. The depositors got their money back but the shareholders suffered because the City of Glasgow Bank had unlimited liability. As such, 1,819 people were liable for the entire loss. Only 254 emerged solvent. Although one English bank went under two months later, others were able to survive the liquidity shortage by drawing on the Bank of England’s reserves. Back in Scotland, the Glasgow bank’s directors were put on trial for fraud. They received between eight and eighteen months in prison. Design published in 1879. The bank was not completed as such, but roofed in a simplified form by the liquidators and sold to Mann Byars as a warehouse. Mann Byars closed in 1938. Demolished in 1958.

From The Building News, June 13 1879: “The building which forms the subject of the illustration was in course of erection, and nearly completed, at the time the Bank stopped payment in October last. It has since been completed and roofed in at the level of the main cornice, but the work above this stage will not now be done. The material used for the building is from the Overwood Quarries, with a granite base up to the height of the street floor sills. The architects are Messrs. Campbell Douglas and Sellars, Glasgow. “