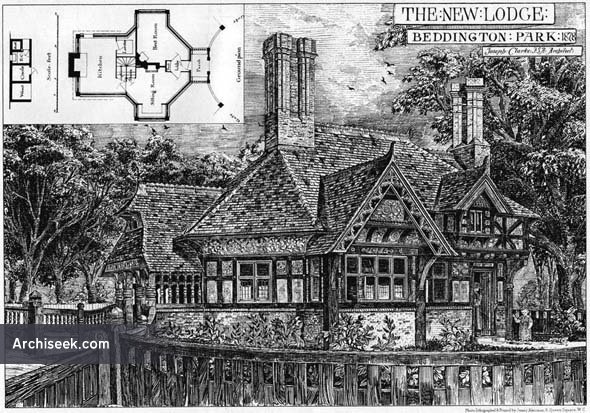 Described in The Building News: “Beddington Park, the seat of the ancient family of Carews for many centuries, was sold under an Act of Parliament, and subsequently purchased by the Eev. Canon Bridges. Much has been done by him to improve the park, through which a beautiful trout stream, the Wandle, flows ; new bridges have been built ; keeper’s house erected ; the park enclosed ; and various works besides the lodge shown in our illustration, which is taken from the drawing at the Royal Academy, and is built near the church, under the direction of Mr. Joseph Clarke, F.S.A.— Mr. Bridges’ architect. The lodge is half-timbered, painted black, carried on a brick base with the plaster panels stamped and raised ; the interior is carefully fitted up, and entirely in pitch-pine. Messrs. Roberts, of Kheidol-terrace, Islington, were the builders.”