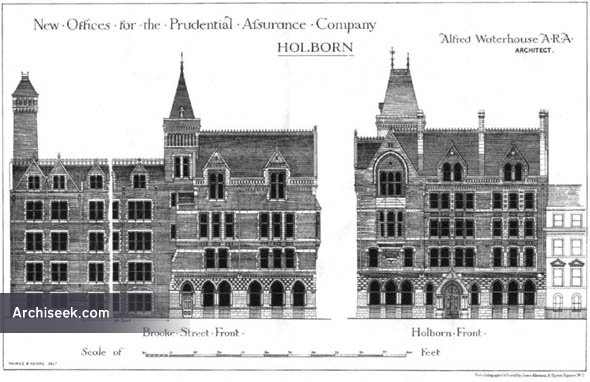 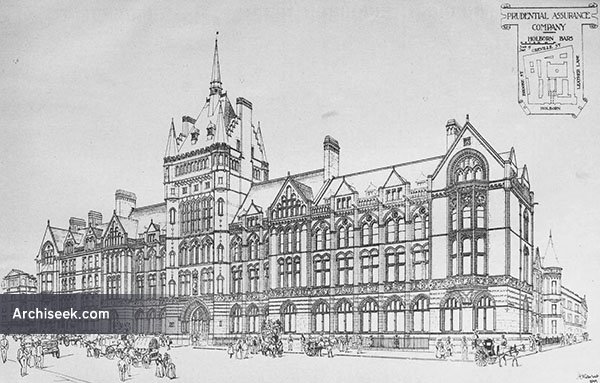 Waterhouse designed many offices for the Prudential Assurance Company, including their Holborn Bars head office in Holborn and branch offices in Southampton, Nottingham and Leeds. Constructed in a vibrant red terracotta, it was extended by 1906 to occupy the entire block, and was finished by Waterhouses’s son, Paul. The principal facade is symmetrical with lancet windows, a roof outline of gables and spire, and a large central tower with a pyramidal roof. Illustrations published in several architectural magazines including The Building News, July 12th 1878. The address of the building is now known as 1 Waterhouse Square, and it is the London headquarters of English Heritage.

“This illustration is referred to more particularly in our review of the architectural works exhibited at the Royal Academy this year on page 5().5. It represents the only exhibit of Mr. Alfred Waterhouse, R.A., the subject being the immense block of Insurance Office buildings, which will form so conspicuous an improvement at Holbom Bars, in continuation of the already existing premises erected by the Prudential Company a few years ago from the designs of the same eminent architect. The key plan given with the view displays the general arrangement of this great scheme now in progress of building. The original drawing is a brilliant water-colour by Mr. Waterhouse himself, our lithographic plate being taken from the outline picture before it was coloured. “