1878 – Institution for the Education of the Daughters of Missionaries, Sevenoaks, Kent 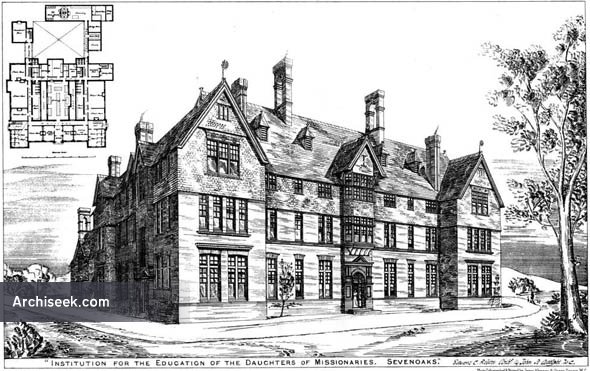 Published in The Building News, October 18th 1878. “This institution has been for many years located at Walthamstow, but the committee recently decided that a new building should be erected on a site which has been selected and purchased, overlooking Knowle-part, at Sevenoaks, Kent. The preparation of the designs and drawings of the proposed building were entrusted to Mr. E. C. Robins, F.S.A., of 14, John-street, Adelphi. The main building is in the form of a quadrangle, on the north side of which are the domestic offices, two stories in height, on the west side is the senior school, and on the east the junior school. On the south side, being the principal front (shown in our illustration) are the reception-rooms, library, and class-rooms. These three sides are three story buildings, the two upper stories being devoted to dormitories, some of which are divided into separate cubicles similar to Milton Mount College, Gravesend, which was designed by the same architect. The internal court is divided by a single story building from north to south. This building is the dining hall and meeting room, and is entered from the south corridor immediately opposite the principal entrance, and is served from the north corridor opposite the kitchen. Parallel with the east and west corridors are the lavatories and w.c. and cloak-rooms, lined with cloak closets. These also encroach on the internal open court already intersected by the dining hall. Simplicity of arrangement and design has been sought, combined with every necessary convenience, the dining hall and the entrance hall and waiting room being the only portions to which any attempt at ornamentation has been admitted. The whole of the foundations up to the damp-course, and all the drains and water-courses and tanks have been constructed by Messrs. Punnett and Son, who are now engaged on the lodge. Estimates are about to be obtained for the completion of the building by instalments as the funds accrue. There is to be a detached building for an infirmary, and also laundry buildings and other offices, and a covered playground surrounding the kitchen court on the north side of the building. The accommodation is limited to 100 girls, the present being first provided for that the old building and grounds may be disposed of.”