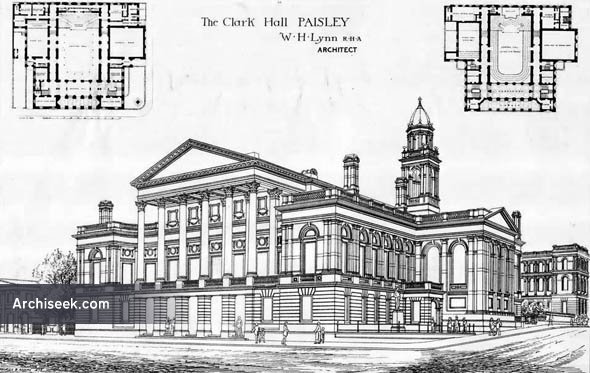 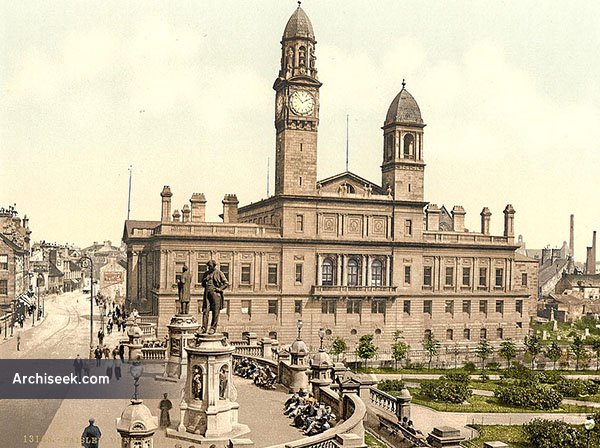 Paisley Town Hall (the George A. Clark Town Hall) was funded by Clarks, the owners of the local Anchor thread mill. This and many other remarkably grand buildings in Paisley, testify to the power, influence and success of the textile industry in the town.

An architectural competition was held and won by a scheme “of early French Gothic grandeur” by the Paisley architects Rennison and Scott. There then followed an unexplained “period of hesitation”. This was resolved by the four surviving Clark brothers selecting a classical entry which had not even been shortlisted because it would have cost £50 000 (thread magnate George Aitken Clark had left £20 000 for its construction). According to the official account “the architect was summoned to an interview with the Messrs Clark; the matter of cost was not considered an obstacle”. The final cost is thought to have been about £100,000. 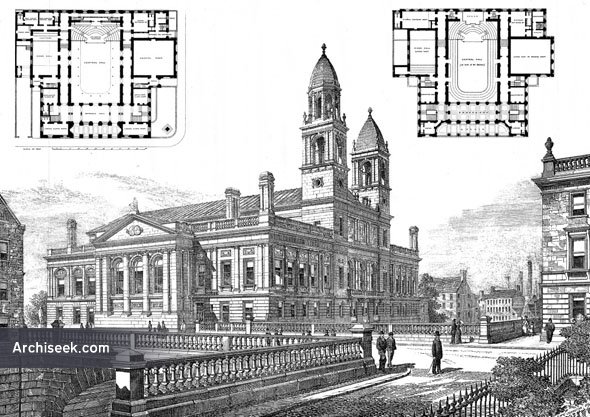 The colossal square Clock Tower’s 9ft inch diameter clock faces are surmounted by the octagonal belfry with 10 bells and female figures representing the. Four seasons by James Young of Glasgow – Autumn with a sickle-faces the Cross. The clock and bells were made by Gillett and Bland of Corydon, who also provided a Patent Carillon System, playing 36 tunes changing daily including the Marseillaise, God Save the Queen, and Scots Wha’ Ha’e. The lower tower which served as a ventilator seeks to balance the clock tower with its bulkier roof. The building’s silhouette is further articulated by eight massive chimneys (one at the North West corner now missing).

“We give this week a view of the minor hall and river front of the above building. The memorial stone of the building was laid on the 22nd of October last by Mrs. Clark, of Gateside, the mother of the originator of the undertaking, and of the Messrs. Clark, of the Anchor Mills, Paisley, who are contributing largely towards the carrying out of their brother’s intentions. The sum of £20,000 having been bequeathed by the late Mr. Geo. A. Clark for the erection of a publio hall, reading-room, &c., for the benefit of his native town, steps were taken accordingly, and designs for the building were obtained through the medium of competition. The requirements set forth in the instructions to architects being found to be considerably beyond what could be provided for the above sum”, the Messrs. Clark, rather than curtail the extent of the building which they thought were necessary, have generously supplemented the amount bequeathed by their brother. The cost of the site was £10,000, and the expenditure on the building itself will reach to about £.50,000. In addition to this Mrs. Clark has signified her intention of presenting an organ for the large central hall, and a capital sum with which to endow it. Mr. W. H.Lynn, R.H.A., of Belfast, is the architect. In a previous number we gave a view of the two principal fronts, and a general description of the building. The work has now been carried as high as the level of the first string-course. ”