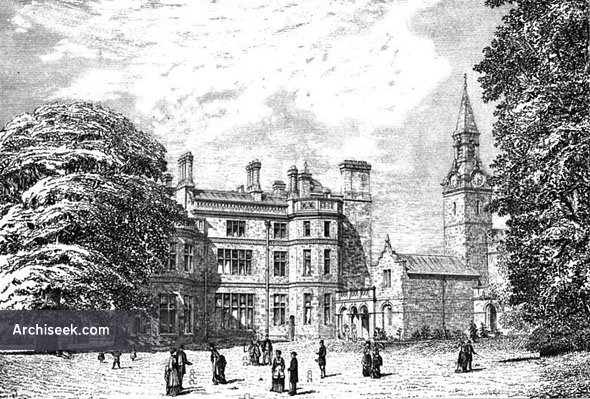 From The Architect, July 5, 1875: The mansion at Pale, Merionethshire, of which we this week give an illustration, has recently been erected for Mr. H. Robertson , M.P., from designs and under the superintendence of Mr. S. Pountney Smith, Architect, of Shrewsbury.

The house is beautifully situated on an eminence in the valley of the Dee, near Bala; it is built of white freestone from the quarries near Ruabon. The works of the fabric have been carried on without the intervention of a contractor, the joinery and elaborate wainscoat work have been admirably done by Messrs. Shelton, of Birmingham, and Messrs. Cox, of London, have supported their fame by the excellence of the carved woodwork they have supplied. The principal fire-grates in this house are constructed specially from the designs of the architect, and are carried out in solid bronze, ormolu and bright steel, with tile slab chambers. These and the marble chimney-piecea were supplied by Messrs. Bennett, of Liverpool, who also constructed the water, kitchen, and general culinary arrangements under Mr. Pindar’s energetic management. Mr. Stanhope Bull has acted as Mr. Robertson’s agent and clerk of works.

Palé Hall was the home of Scottish railway pioneer and engineer Henry Robertson, who had come to North Wales as a young man in 1842. Robertson, a pupil of Robert Stephenson, was a contemporary of the equally illustrious younger Stephenson, George. Apart from extensive railway-building in Wales and the border counties (including viaducts on the Shrewsbury-Chester line at Chirk and Cefn Mawr), it was under Robertson’s direction that steel-making was established at what had been the Iron Works at Brymbo. Robertson had also been a Liberal MP, first for Shrewsbury then Merionethshire. He died in 1888, so did not live to see the Queen’s visit to Palé the following year – that pleasure fell instead to his son, Henry Beyer Robertson, upon whom the Queen conferred a knighthood during her visit, partly in recognition of his father’s services to the development of North Wales.

Sir Henry Beyer Robertson (1862-1948) assisted his father in various business enterprises and was involved in many new developments at Brymbo steelworks. During the First World War he ensured maximum production of iron and steel for munitions. Pale was turned into a military hospital and a hydro-electric plant was established there in 1918. Henry Beyer Robertson was a director of several companies, including the Great Western Railway Company, and a member of the River Dee Fisheries Board. In 1890 he was granted a knighthood.