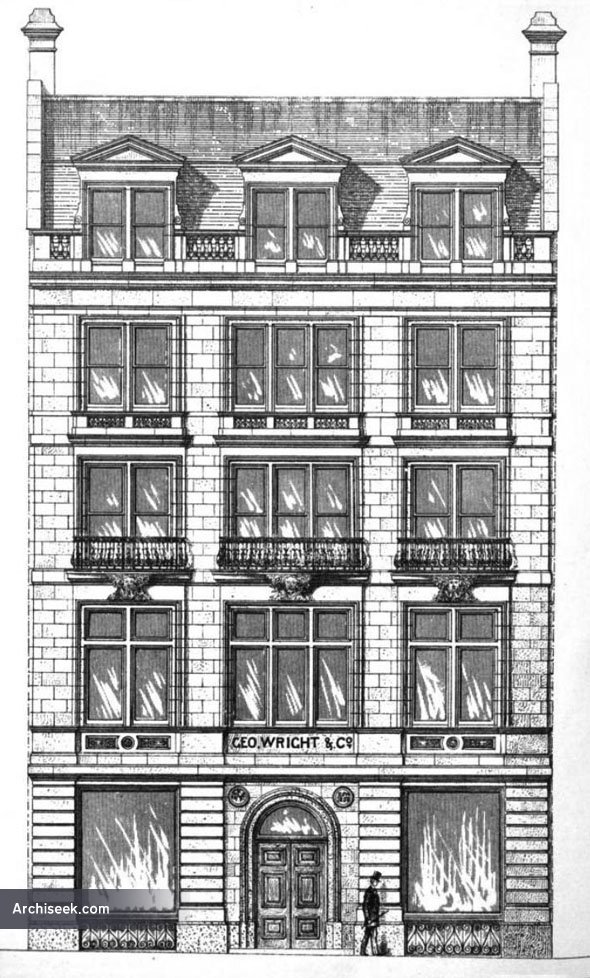 From The Architect, March 13, 1875: These premises have been just completed for the old established firm of Georqe Wright & Co., grate and stove and iron manufacturers, of Rotherham, who have removed into them from heir former premises in Suffolk Lane, which had become too small or their increasing business.

The building consists of a sub-basement, a basement entered from he Thames Street level, ground floor ou the Queen Victoria Street evel, and four floors over. The ground and three floors over are devoted to the purposes of show rooms, the top floor is used as work room. The basement is the usual unloading and storing place, while he sub-basement, which is fire-proof, contains the heating apparatus, one of Weight’s patent gill stoves, which supplies warm air 😮 the various floors, and heats the building throughout. A lift runs from basement, communicating with every floor.

The whole of the walls and ceilings internally are matchlined and minted, no plaster being used in any part, and a handsome pitch )ine staircase leads from the ground to upper floors. The exterior elevation is constructed entirely of Portland stone, the ironwork of balconies, &c., being supplied by Messrs. Wright themselves.

The style is Italian, treated somewhat in the French manner, and the object has been to obtain a substantial, quiet, and business-like character rather than an imposing or striking one.