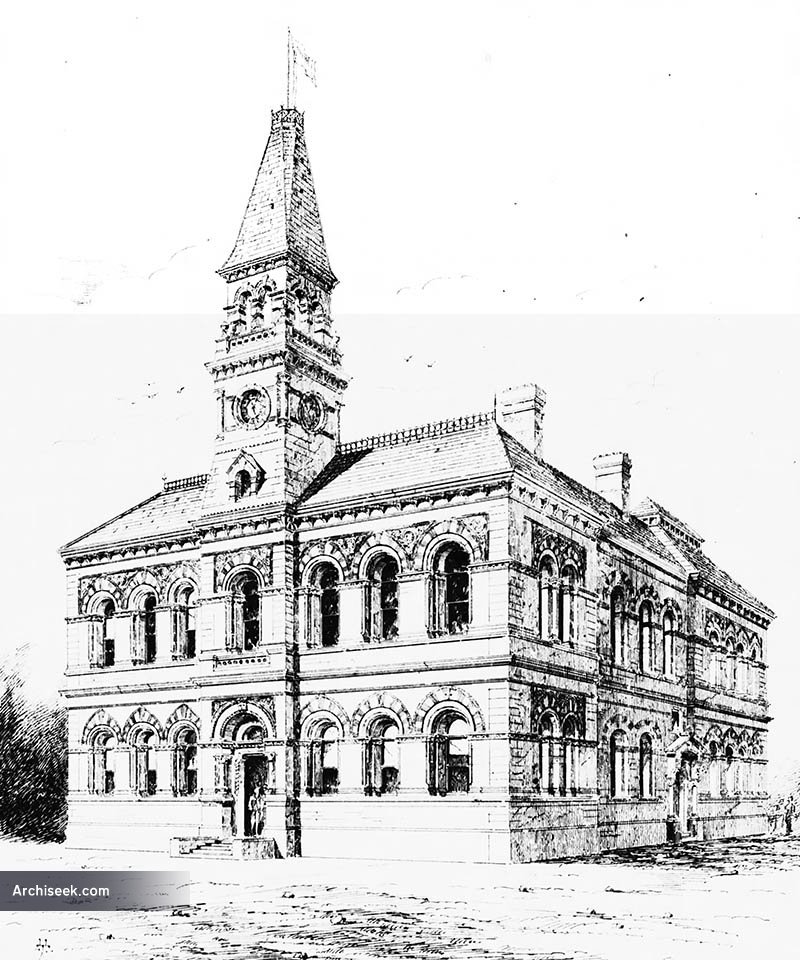 Designed by William Hague (who was better known for his churches), Sligo Townhall is a well proportioned building in a Lombardo-Romanesque style. The dominant feature is the central clock tower and truncated spire. Illustration published in The Irish Builder, March 1 1870.

Internally, the building has offices to the front, with a toplit staircase that leads to the council chamber on the first floor above the main entrance. The staircase hall has frescos by Bernard McDonough, painted around 1950.

“THE building illustrated in our present number was commenced so far back as the year 1866, but owing to unforeseen circumstances the completion has been much delayed, although considerable progress has been made with the carcase of the structure, the exterior which we represent being entirely finished with the exception of the carving.

At the outset, competition designs were invited, and in response some thirty sets of drawings were submitted. Sir John Benson’s valuable professional aid was called into requisition in the selection of the most suitable design, and after minute investigation he pronounced in favour of that submitted by Mr. William Hague, F.R.I.A.I., of this city, recommending it for adoption as affording the most suitable and convenient arrangement of plan, coupled with the best architectural effect, and combined with moderate expense. The plans having been somewhat altered and modified from those submitted in competition, the building was finally contracted for at the sum of £6,863, including the clock tower. The stone used in the building is dark in colour, and the dressings are of lime and freestone, the latter obtained at Mount Charles, and contrasting in a pleasing manner with the colour of the masonry.

The caps of shafts are of Portland stone for carving, as also the spandrils of window arches, &c. Contrast in the colour of materials used in construction has been availed of as much as possible in shafts, bands, strings, and voussoirs of arches, and with the best results, as the building is effective in appearance.

Provision is made in the clock tower that the harbour master may look out into the bay, and the views obtained from it are exceedingly fine, commanding such an extensive range to sea and land. The plan comprehends on the ground floor a large reading room and exchange, offices for town clerk and inspector of weights and measures, municipal council chamber, and borough court, with retiring and robing rooms, and large hall rising to the roof, lighted by a dome lantern, and containing the principal staircase. The upper floor consists of a public assembly or ball room, 75 ft. 6 in. by 33 ft., and 30 ft. high; committee and ante rooms, secretary and harbour master’s offices, with ladies’ and gentlemen’s retiring-rooms in connection with the assembly-room. The basement is occupied by a large kitchen, with culinary offices attached; housekeeper’s apartments, wine cellar, boiler-room, and coal-vaults. Beneath the borough court is a night watch-room, with cells for male and female prisoners. On each floor there is ample lavatory and w.c. accommodation. The apartments where open grates are suitable are provided with fireplaces, and the larger or public rooms are to be heated as usual by hot-water, carried through pipes from the boiler in basement. The contractors for the whole are Messrs. Crowe, Brothers, of Great Brunswick-street; and so far as they have progressed, everything has been done in a creditable manner. The entire work is under the immediate control, and has been carried out under the personal superintendence of the architect, Mr. Hague.” The Irish Builder, March 1 1870.