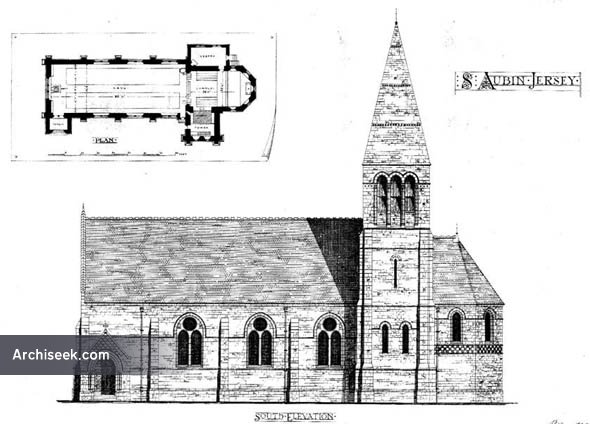 Published in The Building News, August 1st 1873. “The erection of this church (from the designs of Mr. J. Edward K. Cutts, architect, Hammersmith, W.) was to have been commenced last spring, but owing to the failure of the Bank, in which the money collected for the purpose had been placed, the erection has been postponed for a year or two. The church will stand at the entrance to S. Aubin, on the road from S. Helier’s, with a tree-covered cliff on the north (or, strictly speaking, west) side, and only the road and railway between it and the sea on the south (i.e., east) side, and with its tower and spire will be a conspicuous landmark from S. Helier’s and tho sea. The only building-stone of the island being granite, it has been found necessary, for economy’s sake, to keep the work exceedingly simple, and to trust to size and proportion together with the beauty and colour of the material for effect. The form of tower and spire shown in the design is used, to be somewhat in harmony with the native type, which is almost universally a simple central tower with a plain lancet window on each face, surmounted by a pyramidal spire, the junction of which with the tower is so slightly marked as to be barely perceptible. The walls of the church will be built of quarry-faced granite, red and grey being used indiscriminately, with a slight admixture of black; the doorways, windows, and arches being also of granite, with an axed face. The font, pulpit, and reredos will be of polished granites of different colours, of which there are several beautiful varieties in the island. The floors will be paved with plain tiles, which in the chancel will be enriched with encaustics. The seating, of light open benches in the nave, but of a more substantial character in the chancel, are to be of deal lightly stained and varnished. The roof timbers will be of the same material, covered with red tiles, which, together with slates, lime, &c., have to be imported from England. The diaper work shown on the walls inside and out will be of red and black or red and grey granites. The building is to be erected for about £4,000, and will seat 300 people in the nave. We may probably give perspective sketches in a future number.”