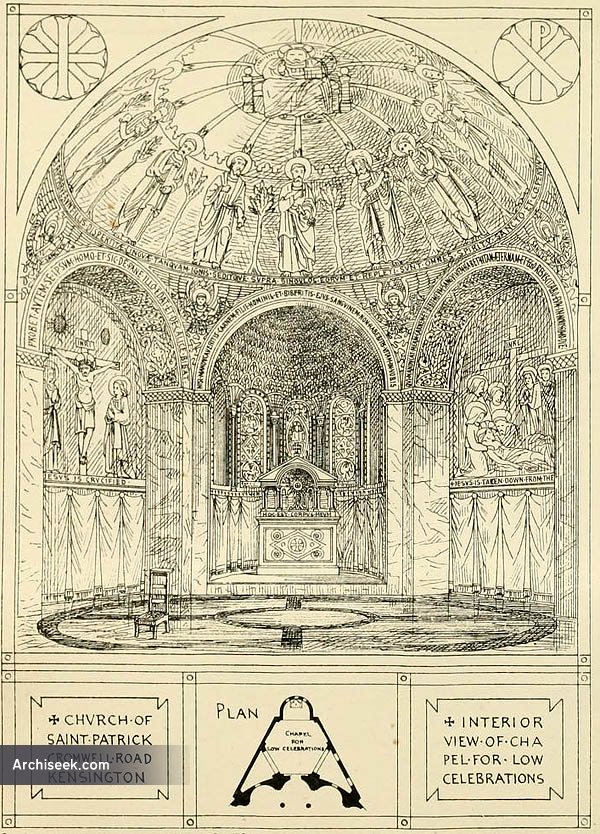 The designer Henry Conybeare was not a prolific architect; but an engineer. He had begun his career in India, where in the early 1850s he designed and laid out waterworks for the city of Bombay. Returning to England at about the time of the Mutiny, he ran an office as a civil engineer until 1870; later, in 1878, he was to emigrate to Caracas, where reputedly he died in 1884. Throughout his life Conybeare nurtured a passionate, eccentric interest in Gothic architecture and the problem of modern church-building. The church was to be an unusual one . To use space to the utmost it was tightly planned from north to south in a semi-basilican manner, with a narthex at the south end (entered from Providence Terrace), a broad seven-bay nave with passage aisles or ‘ambulatories’, a brief choir, and an apsidal sanctuary incorporating a further ambulatory behind . At the northern end of the site, a hexagonal chapel and vestries filled in the awkward angle. The dress of the church was to be ashlar, and its style ‘Rhenish Romanesque’ verging upon the earliest Gothic. The roof rose to seventy feet, and the nave arcade incorporated a triforium and a clerestory of cusped rose windows, echoing a larger rose window at the south (liturgically west) end.

Interior view including ground plans published in The Building News, July 25th 1873 and shown at the Royal Academy. Never constructed. 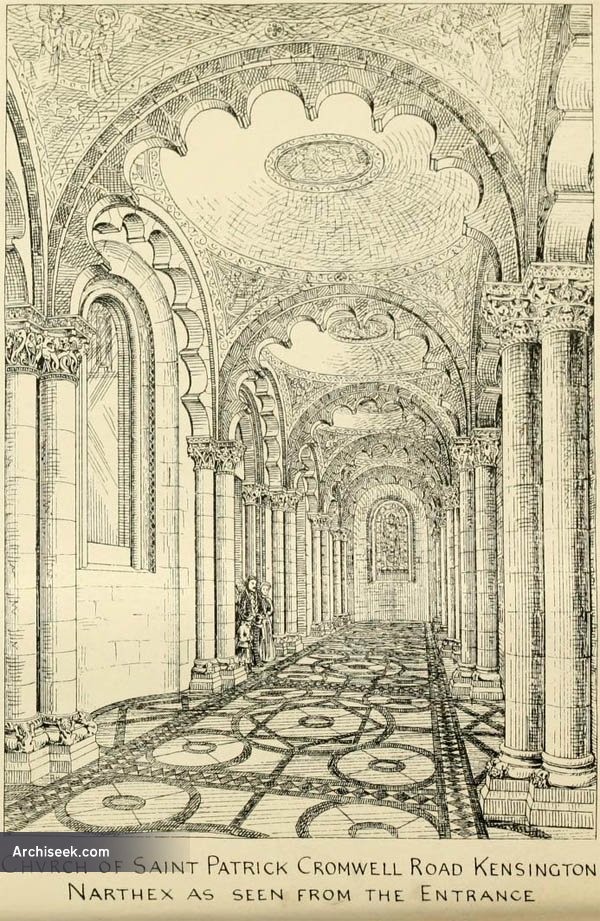 In our issue of the 27th of Juno last there appeared four illustrations of this church — ground- plan with details, exterior perspective, interior looking east, and interior looking west (double page). We add in our present issue an interior view of the narthex, or western porch, as seen from the entrance, and an interior of the eastern chapel for early services.

As will be seen on referring to the small index map given above the ground-plan in our issue of the 27th of June, this church is situated close to the line of the Metropolitan District Railway, at the point where it crosse under the Cromwell-road, half-way between the High-street, Kensington, and Earl’s Court stations. As the adjoining district is being very rapidly covered with first-class houses, which are occupied as soon as finished, it was thought desirable to erect a ohuch in their midst ; and the site having boon purchased, a temporary iron church was erected, and the foundation of the chancel of the new church having been filled-!n, the temporary structure was opened for divine service, and the foundation-stone of the new church was laid on the 17th of March (S. Patrick’s Day) last.

Ground being very valuable in this neighbourhood, it was held desirable that the entire area of the site should be utilised by excluding all projections such as external buttresses, inasmuch as such buttresses necessarily (in the case of a town church) involve a waste of valuable ground, and invite the commission of nuisance. It was also desired that the “auditorium” or portion of the church in which the congregation are seated, should be unobstructed by pillars, in order that the whole congregation might have an uninterrupted view of the officiating clergy — and that such auditorium or nave should be as wide as the width of the site permitted, and should be well proportioned as regards the proportion of its height to its width, and of its length to its height.

These conditions are fulfilled as follows: the nave is given a width of 40 feet between walls — the buttresses necessary for supporting a roof of so wide a span are internal, and pierced by arched openings 5ft. Gin. in width, thereby adding a northern and southern ambulatory to the nave, and thus providing (as is necessary in so wide an auditorium) a second approach (in addition to the central passage) to each of the long rows of chairs in which the congregation are seated. They also afford a route for processions, and this ambulatorv is continued round the apse and behind the high altar. These pierced buttresses, through which the northern and southern ambulatories take their course, are connected with each other by a semi-circular transverse vault concentric with the architrave of the nave piers. These arrangements are shown on tho ground-plan, and in the interior views, looking east and west, which appeared in our issue of the 27th of June.

As regards the proportion of height to width in interiors of this class, the minimum effective proportion of height to width is as 1-7 to 1. In this interior the clear width is 4Oft., and the minimum effective proportion for the height•would be, therefore, 68ft. Tho actual clear height to the vertex of the tunnel vault is 70ft. The rule for tho proportion of length to height is that the minimum of unbroken interior length should be at least twice the clear interior height ; this would make the minimum of interior length in this case 140ft. Tho actual interior length is l62ft 6in. This length is not absolutely unbroken; but the two arches of the chancel arch and of the apse arch being concentric with tho tunnel vault of tho nave, and there being no dead wall surface in either case, there is nothing to stop the eye in ranging from the western entrance to tho eastern window of the apse.

It is also indispensable that in a perfect Gothic interior the internal roof should be a Gathic vault , — either transverse or tunnel vaulted — supported by arched ribs, which in their turn are supported by vaulting shafts extending downwards from such ribs to the pavement, thus resolving the interior perspective into a vista of “shaft-sup- ported sub-arches,” and dividing it into a series of strongly demarcated bays or compartments, each of which should be a symmetrical composition in itself. The manner in which these conditions are carried out is shown in tho interior views looking east and west. The vault rib shafts are twelve inches diameter, and project nine inches from tho wall surface.

The style selected is the Rhenish Romanesque .Exception has been taken in some quarters to the adoption of the style, as being “un-English”; but this is obvious cant, for throughout Christendom a Round Arch style preceded the Pointed style. It is true that each of these styles was worked out differently in different countries ; but inasmuch as the fashion at present prevailing in English church architecture is the Early French Pointed, it is obvious that the adoption of the German Round Arched style, which possesses great assthetic advantages over tho former, must be, at least, equally unobjectionable.

The exterior view that appeared in our issue of the 27th represents the church as it will appear from the Cromwell-road. From this view and from the ground-plan it will be observed that the campanile is simply tho extension upwards of the southern transept. In this campanile the bells — a first- class peal of eight, similar to Mr. Donison’s, at Doncaster — will be swung through openings in the tower, as is usual in Italy and Spain. This, arrangement greatly economises space, and is much more artistic and consistent with tho intention of a campanile than the English method of putting up tho bells in a close chamber ; the bells sound infinitely better, and the arrangement necessitates a breadth of treatment which is always an immense gain. The chimes — the notes of which are given on the plan — have been adapted from that most beautiful of Schubert’s Songs without Words, “La Berceuse.”

The sole entrance to tho church, except for the clergy and choir, is through tho western narthex, the details of which can be understood from the plan and from the interior view given in our present issue. The appearance of the church on entering the nave is shown in the view looking east given in our issue of tho 27th ult. The interior effect (anted at at the east end is that of the early Basilicas, thus described by Hope in his “Historical Essay on Architecture :” “Tho long nave and aisles, the flight of steps that led to the Sanctuary, tho Altar of God in tho centre of the choir, seen soaring in the air from tho very entrance of tho church, superbly canopied and backed by a grand finishing Absis, whose couch corresponded in its arch with that preceding the choir, gave to some of these Basilicas, as to San Paolo, and the first S. Peter’s at Rome, an imposing appearance, which even the new S, Peter’s itself, built at the expense of all Christendom, and with the additional splendour of its dome, does not equal! The Baldachino over the high altar is 45 feet in height.

The triforiura gallery of the nave will contain two rows of chairs, with a wide passage behind, and there is a passage completely round the church at this level, as shown in the sheet of plans.

At the east end there is a chapel (illustrated in our present issue) for early services ; and beneath and alongside this chapel are the singing school — the sacristy, the choir vestries both for men and boys, and a lumber room for storing church decorations and stores.