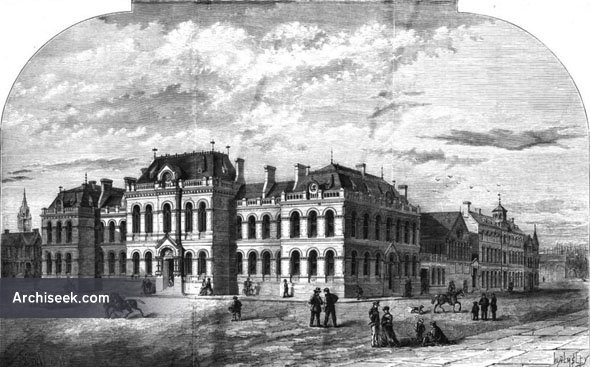 From The Builder, April 9, 1870: The works for the new municipal buildings Belfast Ireland are being energetically forward; the courts will probably be finished May and the whole completed in little than a year from the present time. The plan comprises besides council and corporation offices a recorder’s court custody and summons courts for magistrates the necessary offices in connection with them prisoners cells and charge office, police barracks for sixty four men with stables district stores; fire brigade station for six engines with superintendent’s house and stables. The material is perforated brick from Ravenhill and the freestone dressings are of red stone from Dumfries The site is adjacent to the proposed Railway Station and at the junction of Victoria Street and Chichester Street from which the view is taken. The design is that selected in the of January 1869 bunt our view shows the additional building required subsequently to the contract plans to form the central police barrack of the district and a tower for the fire alarm bell. The contract was taken at 16,000, by Mr James Henry. This was the sum stipulated the instructions to competing architects but additional building will most likely increase total outlay to 20,000. The architect is Mr Anthony Thomas Jackson of Belfast. 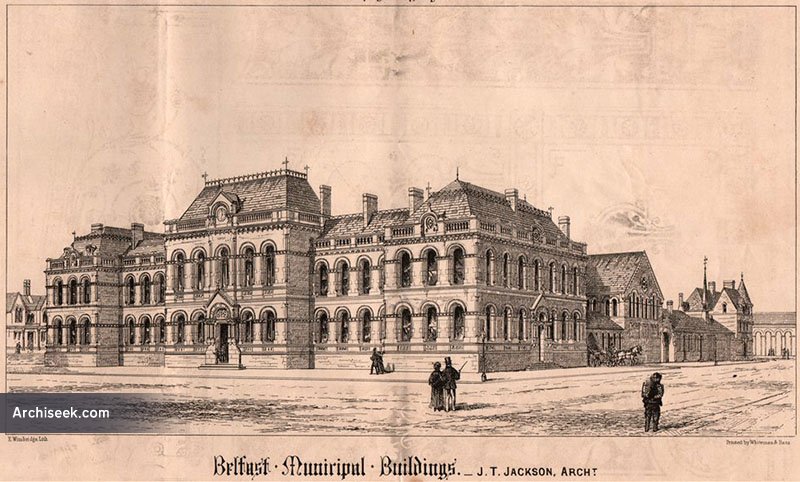 It has been used for various purposes since 1906, including offices for the Ulster Unionist Party and more recently as a Police Court, Recorder’s Court, Youth Court, Family and Domestic Court and the Coroner’s Court.