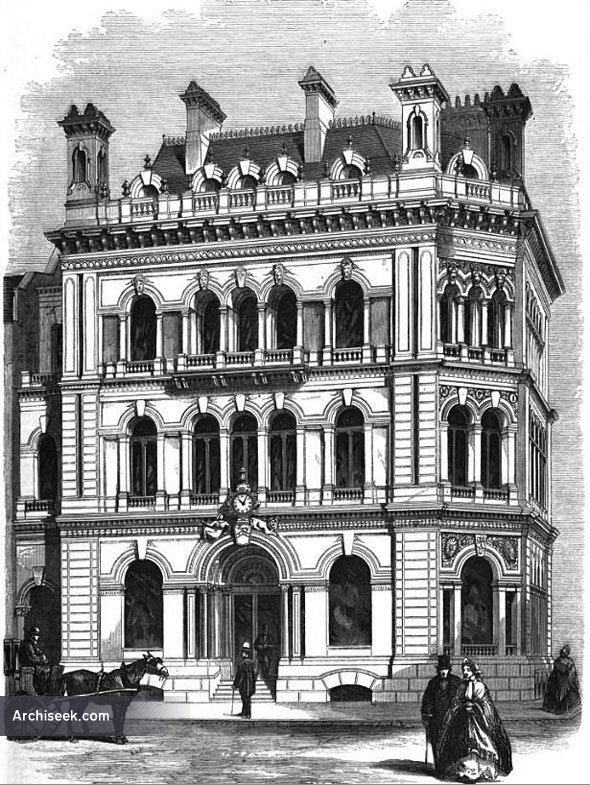 From The Building News, October 24, 1862: Our illustration obviates the necessity of describing the exterior of the building, its well studied proportions, its general composition, or ts vigorous and healthy expression; but we would direct the reader’s, and we hope visitor’s, attention to what cannot be more than indicated in our view””the extreme delicacy and charming originality of its detail. The ornament does not, as is too frequently the case, destroy he effect of the plain parts by intruding itself prominently upon the eye of the spectator, but is united harmoniously with it. It does not oven hide the mouldings which frame it. The scrolls on the side of the key stones, on the second floor especially, are capitally managed. Not content with making them gradually join tho plain stone face, tho architect has continued them >y a single incised lino a few inches further on, bus losing them in instead of on tho surface of tho work. The spaces between the consoles of the cornice again project slightly forward, and exhibit the full force of their enriched panels. The soffit of the entrance doorway is elaborately carved, and it is surmounted by the arms of tho institution, with a lion and a woman as supporters. A clock will fill tho circle shown in our view. The spandrils to the windows on the cant ire splendid specimens of Mr. Kerr’s ability in treating folliated ornament not only as decoration architecturally. Tho frieze of tho ground-floor gain is no mere transcript from old examples. The general form is no novelty, but the spirit in which the ornament has been carried out reminds s once again of Mr. Kerr”s early utterances”” ‘ It is not that I love Greek, Italian, or Gothic ess, but that I love Nature more.” Both the fronts are paved with Portland stone of excellent quality. The ground-floor windows are ecured byBunnett’s iron shutters””too well known and appreciated to need any further tribute to their excellence.