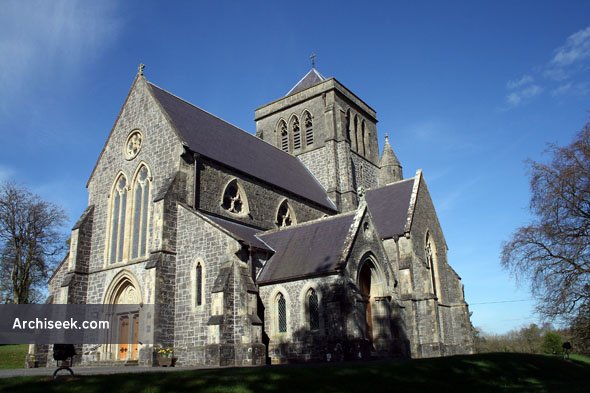 Work on the present cathedral began in 1858, and it was designed by the English architect William Slater. The porch was added to the Cathedral in 1869, from William Slater’s design. Major renovations were undertaken in 1925, including the installation of electric light. The Cathedral is built in the Early Decorated or Middle Pointed style. Its plan is cruciform, consisting of nave, aisles, transepts, chancel and a central tower which is finished by a four-sided pyramidal roof.

The Cathedral is chiefly known for the carved Hiberno-Romanesque doorway which serves as a vestry door. It is believed that this doorway originally formed part of the Cathedral at Toneymore which was built after the Diocese of Kilmore was first granted official recognition by the Synod of Kells in 1152. The Cathedral at Toneymore fell into disrepair after the Church of St Fethlimidh was converted into a Cathedral in 1454. It was then salvaged the doorway and inserted it into the western gable of the Abbey of the Holy Trinity on Trinity Island in Lough Oughter. The Abbey, which was established in 1237 or 1239, was destroyed in 1570, and the doorway was then taken to the old Cathedral in Kilmore (now the Parochial Hall), where it was used as the main entrance. Finally, the doorway was moved to its present location when the present Cathedral was built in 1858. 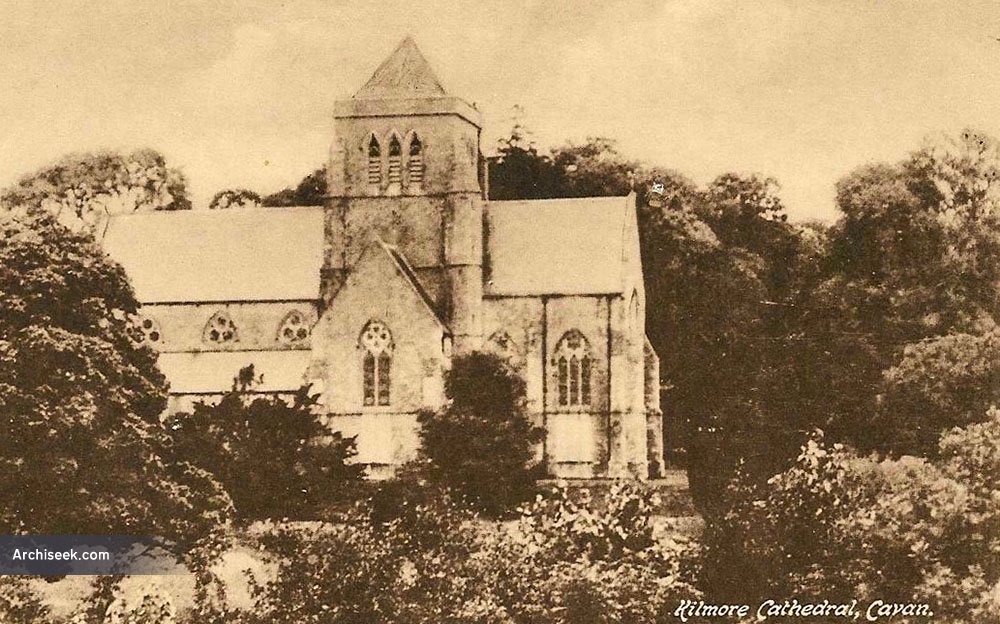 “The plan is cruciform, consisting of nave and aisles, transepts, central tower and chancel; the style adopted is the second pointed. The nave has a clerestory of spherical triangles, and is separated from the aisles by an arcade of three arches; the roof is open with arched ribs; the west door is double with a pier in the middle; the tympanum being filled with carving in medallions on a field of diaper. The chancel proper is two bays long, and the east window has five lights. The tower rises one stage above the roofs, and is finished by a four-sided pyramidal roof. The internal arrangements are as follows :-The nave is occupied with open moveable seats for the general congregation; in the south transept are placed the children of the schools, in the north is the organ. The vestry is on the north side of the chancel, in which is introduced, with very good effect, the old Norman doorway of the old cathedral. The stalls for the clergy and choir are placed under the tower, the bishop’s throne being on the south side-all these are of oak; the back stalls, 10 in number, are for the clergy, and have carved ends and divisions. The stalls for the choristers have ends with a carved top and finial, the front being divided into panels, the upper part of which is also carved. The book board for the choristers is supported by columns with carved brackets. The bishop’s throne has over it a canopy carried on columns with carved caps, the spandrel and cresting of the canopy is also carved; they are executed by Mr. Forsyth, of London, from the designs of Mr. Slater. The chancel is left unencumbered with seats, so as to be available for gatherings of the diocesan clergy, ordinations, and the like. The font is placed near the west door.

The pulpit stands at the north-west pier of the tower. These were executed in Dublin by Messrs. Purdy and Outhwaite, who also carried out all the stone carving. The materials used in the general construction are a dark limestone procured in the neighbourhood, with a lighter stone from Dungannon for the dressings.

The external effect of the church is much increased by its very favourable position on the brow of a gentle elevation. There are at present only three stained glass windows in the church—two in the south transept, by Mr. Ward, and one in the south aisle, by Messrs. Clayton and Bell. The chancel is paved with Minton’s tiles. The whole work forms a memorial to Bishop Bedell, who was born at Black Notley in Essex. He received his education at Emmanuel College, Cambridge. In 1626 he was chosen provost of the University of Dublin, at the decease of Archbishop Usher. He continued in that office only two years, being ap pointed Bishop of Kilmore and Ardagh in 1629. He was a man much beloved by both Protestants and Roman Catholics. His death, which was accelerated by the treatment he received during the rebellion, took place in 1641. He was buried in the grave yard of his own cathedral. The remark made by a Roman Catholic priest at his burial deserves record, as showing the deep impression the sanctity of his life had made on all who knew him -“Sit anima mea cum Bedello.””