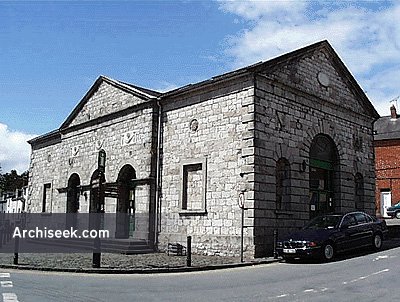 The Market House was designed by Colonel William Hayes of Avondale, County Wicklow and stands in the middle of Market Square. The building is of five bays in length with the centre three arches projected with a secondary pediment. The outer bays contain blank windows. The ends of the Market House have large rusticated arches flanked by round headed niches. Above all the arches are inset panels with festoons while the blank windows and niches have medallions. At the eastern end the pediment contains a carved Conygham (later Rossmore) coat of arms. After lying empty for many years, the building has been renovated and is used as a Tourist Office and gallery space.

Acording to Lewis “The market-house, a very commodious building, was erected by the late Gen. Conyngham, afterwards Lord Rossmore, whose arms are emblazoned over the entrance.”