Waterford tower to be twice as tall as Liberty Hall 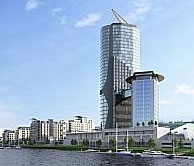 A tower described as being twice as tall as Dublin’s Liberty Hall will form the focal point of an urban development in Waterford, which is set to create 400 jobs during construction and a similar number on completion in 2014. The riverside development will incorporate a 156-bedroom hotel, 22 floors of apartments above 10 floors of offices in the central tower and a marina and leisure centre, while the possibility of a light rail system servicing the site has also been flagged by the developers. Named Water Haven, the €380 million project is earmarked for a 13-acre site formerly owned by Waterford Stanley beside the river Suir at Bilberry in Waterford city. The scheme, on land formerly used for an iron foundry, is the brainchild of developer William Bolster of the Bolster Group. A planning application is due to be lodged soon with Waterford City Council by the design team led by CJ Falconer & Associates.