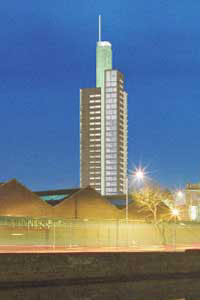 Cork has again stolen a march on Dublin, with the Elysian tower overtaking Cork County Hall to claim the title of the Republic’s tallest building, 11m (36ft) higher than Liberty Hall in Dublin, which is still the capital’s tallest despite numerous proposals to go higher. While Dublin is still in the process of discussions and deliberations about the planning of tall buildings, Cork has gone beyond that and is delivering them, Norman Craig, managing director of construction consultants Davis Langdon PKS, said last week. In June, the Office of Public Works confirmed the 117m apartment tower planned for a site near Heuston train station had been put on the long finger because of current market conditions – three years after An Bord Pleanla granted planning permission for the project. Upholding a decision by Dublin City Council, the appeals board gave its approval largely because of the design quality of the scheme by Paul Keogh Architects. Design was also the key issue in the board’s decision last week to approve Foster + Partners’ plans for the Clarence Hotel. But An Bord Pleanla has been far from indulgent in permitting high-rise schemes in Dublin. The record shows it is not prepared to approve random tall buildings, particularly in cases where there is no local area plan with explicit provisions for extra height.