Orchestral manoeuvres on the campus 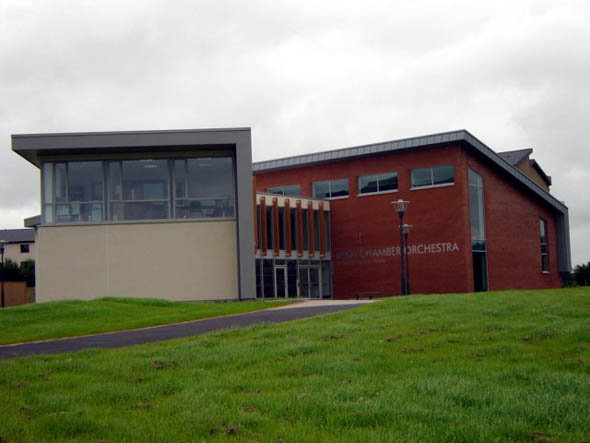 We don’t hear many good-news stories in these days of doom and gloom; but today’s official opening of the Irish Chamber Orchestra’s new building, on the campus of the University of Limerick (UL), is putting smiles on lots of faces. Designed by Project Architects in collaboration with specialist acousticians AWN Consulting, the gleaming new block on the college’s north campus incorporates a state-of-the-art rehearsal room, an instrument storeroom and a musicians’ common room as well as office accommodation for the orchestra’s administrative team. “It became obvious to me about five years ago that we needed to develop our own home,” says the ICO’s chief executive, John Kelly, one of the driving forces behind the project. “When the orchestra relocated to UL in 1995, I was actually the guy who relocated. There wasn’t anybody else.” Once established within the university, however, the ICO quickly began to grow. “We brought Fionnuala Hunt on board, we contracted 13 players, and I hired two other people to work . . . in the office.” As the university itself developed, rehearsal space became harder to find. “At first we rehearsed in the Bourn Vincent Gallery. But it was being developed as an art gallery, and as more exhibitions were hung it became less and less possible for us to rehearse there. We also shared space with the Irish world academy of music and dance, but as their programmes grew it became more difficult to access that space, too. The primary function of the university is, after all, education. When we found ourselves having to rehearse off-campus in Killaloe, I realised that we were going to have to build our own space.”